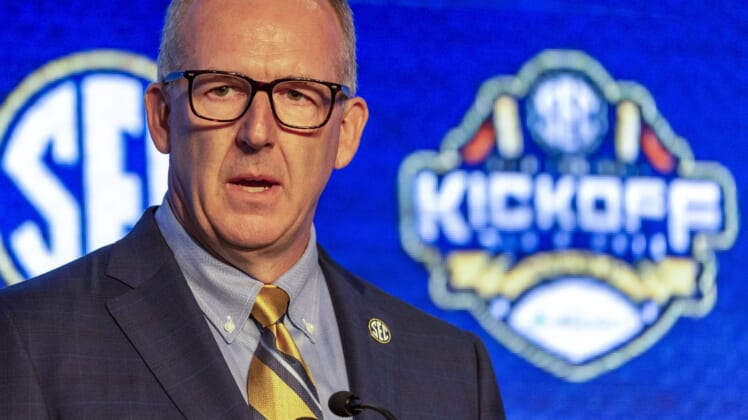 Across the country, countless universities are experiencing an outbreak of COVID-19 cases among their student-athletes. At a time of considerable uncertainty for the 2020 college football season, SEC commissioner Greg Sankey has indicated when the conference will determine the fate of football in the fall.

Will there be a college football season this fall?

In an interview on The Rich Eisen Show, SEC commissioner Greg Sankey opened up about the process the conference is going through during the COVID-19 pandemic. While he said the conference remains confident football will be played this fall, he also made it clear that discussions are still ongoing.

The SEC, along with the NCAA, took a step towards football being played by allowing student-athletes to return to campus for voluntary workouts in June. Since that time, programs have been putting their players through COVID-19 testing and allowing those cleared to train together.

However, many top schools have since experienced an outbreak of the coronavirus. The University of Florida announced 11 of its student-athletes tested positive and more than a dozen LSU Tigers players contracted the virus. In Alabama, the Crimson Tide have eight positive cases, the University of Auburn had at least three and the numbers are increasing each week.

Amid the growing uncertainty, with athletic directors now focused even more on keeping their student-athletes happy, Sankey offered a timeline for when the SEC will likely decide if football season begins on time.

“I think that’s probably a late July time period. My thinking has shifted a bit. We started June 8, after a two-week medical exam period for these voluntary activities…” Greg Sankey said, via The Rich Eisen Show. “On the 13th of July is when a little bit more practice can begin. I think we deserve the chance to see how that progresses. I would say before we get into full-blown practice, you’re going to be in that decision-making process as it relates to what happens on Labor Day weekend.”

While schools like the University of Tennessee have reported zero cases on their football team, most programs aren’t so lucky. As the SEC consults with health experts to determine what steps the conference can take, the pandemic is getting worse each day.

Even if the conference can start its season on time, there are no guarantees it will finish. The Big 12 commissioner cast that warning for his conference. Additionally, the University of South Carolina’s academic schedule indicates that the second wave of COVID-19 will cause further problems this winter.

There are billions of dollars in revenue at stake for the SEC, top universities and even cities like Tuscaloosa. If things don’t improve and playing football puts far more people at risk, we might not see a college football season in 2020.