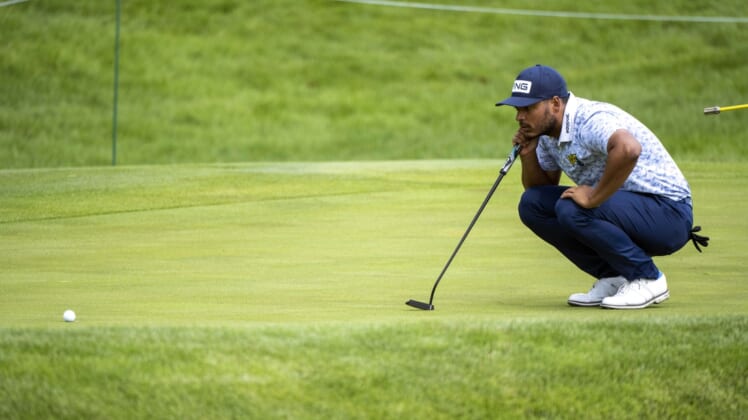 Sebastian Munoz shot a third-round 67 amid a sea of low scores Saturday to grab a one-shot advantage with 18 holes to play in the John Deere Classic in Silvis, Ill.

The Colombian Munoz, 28, secured the tournament lead at 16 under on the strength of six birdies against two bogeys in the third round as he aims for his second career PGA victory.

Brandon Hagy sits a shot behind at 15 under after also delivering a 67 on Saturday, with a birdie on 17 as one of his five on the day. The 30-year-old native of Santa Monica, Calif., is shooting for his first tour victory in his 93rd start.

Munoz, who missed cuts in three of his last four starts, birdied the second and third holes before giving strokes back by bogeying a pair of par-4s on 4 and 6. But he was 4 under for the remainder of the rounds, with birdies on No. 8, 11, 13 and 16.

“It was huge,” said Munoz, whose only other tour triumph came at the 2019 Sanderson Farms Championship. “We could see on the leaderboard that people were going low, and you didn’t want to kind of fade into the leaderboard, so it was really important to birdie 11, 13 and 16 coming in. So it was nice to be in the position I am right now.”

Hagy remained steady as he attempts toe become the fourth straight player to earn his first career PGA win at this tournament.

“I think I’m going to be in the final group … I feel like I can hit all the shots that’s necessary to get me over the top,” said a confident Hagy afterward. “But the key is all these guys here can hit those shots, you just have to stay within yourself, and a few bounces here and there go your way, and we’ll see what happens.”

Since 1970, 23 players since have captured their first PGA Tour victory in the John Deere, more than any other Tour event, according to Golfweek.