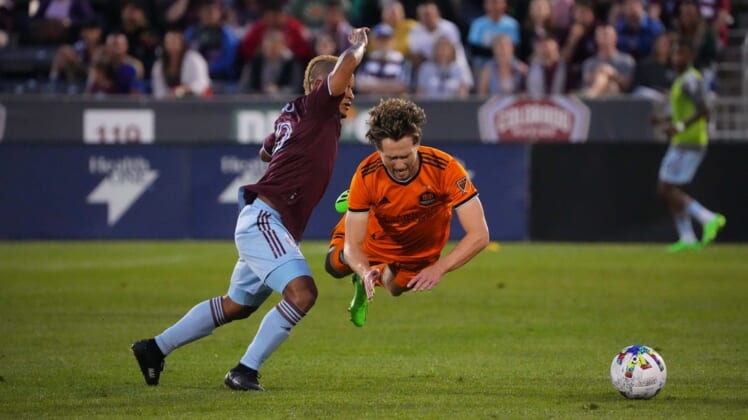 It appeared that Colorado (8-10-8, 32 points) would take a vital three points in their pursuit of the playoffs, but the Dynamo (7-14-5, 26 points) were given late life. Colorado’s Bryan Acosta was sent off in the 80th minute with his second yellow card, leaving the hosts scrambling to hold on.

The Rapids nearly did, making it nearly 15 minutes despite Houston throwing everything at them. Then Ferreira got open at the top of the box and Daniel Steres cut it back for him to run on to. Yarbrough stretched but could not get a hand on it, and Colorado dropped two important points at home. Yarbrough finished with two saves on the night.

It looked like the Rapids would win after Lalas Abubakar put the ball just inside the far post in the 48th minute in the aftermath of their second corner of the young second half.

After the corner kick missed everyone in the box, Lucas Esteves kept it in play and cycled it back to Felipe Gutierrez. Gutierrez picked his head up and lifted a curling pass that found Abubakar still in the box from the corner kick.

Houston seemingly tied the game in the 83rd minute after Fafa Picault headed Hector Herrera’s cross home. However, the goal was immediately waved off as Picault was ruled to have shoved Abubukar out of the way prior to the header.

While there was no scoring in the first half, it wasn’t for lack of trying.

In fact, it looked like Colorado had a golden chance in added time. Esteves got in behind the Dynamo backline and cut the ball back into the middle of the box. Guttierez ran onto it and hit it cleanly but right into the waiting hands of goalkeeper Steve Clark. Clark finished the night with three saves, perhaps none more important than that.

Herrera had the best chance for Houston in the 10th minute after Tim Parker launched his free kick from inside his own half into the Rapids’ box, but Yarbrough made a big save.