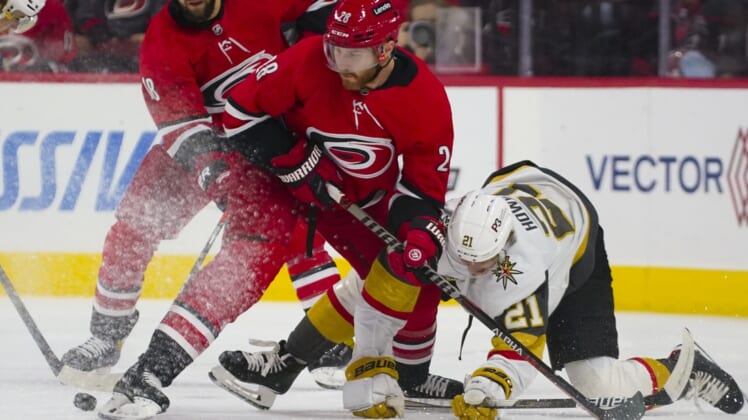 Sebastian Aho scored with 1:11 left in overtime to give the Carolina Hurricanes a 4-3 victory over the visiting Vegas Golden Knights on Tuesday night at Raleigh, N.C.

Nino Niederreiter and Vincent Trocheck scored 57 seconds apart in the second period, and Aho added a power-play goal in the third period.

Frederik Andersen made 26 saves as the Carolina Hurricanes got back to stingier defense until late in regulation, when a two-goal lead disappeared.

The Hurricanes have won four of their last five games, with their lone blip in that stretch a 7-4 loss Saturday night at New Jersey.

Niederreiter opened the scoring in the second period when the Hurricanes had multiple cracks at a rebound on a sequence that was sparked by stellar forechecking. He has 10 of his 12 goals this season in home games.

For both Niederreiter and Trocheck, it was their second goal in a three-game span.

A turnover behind the net led to the Golden Knights’ first goal. The puck ended up in the net off Patrick’s stick with 1:45 left in the second period. Carolina challenged the play, seeking goaltender interference but the goal stood after a video review.

Patrick, who played in only a dozen previous games this season as he missed a couple of months because of an injury, hadn’t scored since October.

The Hurricanes held a 10-5 edge in first-period shots with neither team scoring.

Former Hurricanes center Nicolas Roy was on the third line for the Golden Knights in his first game in Raleigh on the visiting team.