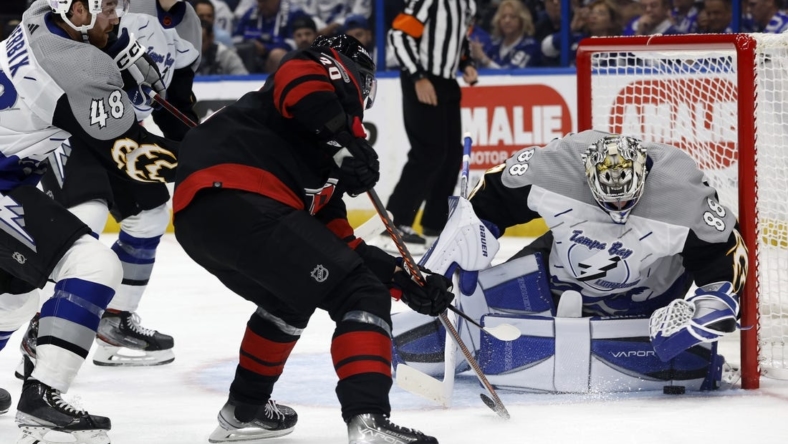 Sebastian Aho scored in the shootout’s sixth round as the Carolina Hurricanes won their third straight game, beating the host Tampa Bay Lightning 4-3 on Thursday.

After Carolina goalie Frederik Andersen stopped Corey Perry in the top of the sixth — the netminder’s fifth save in six shots — Aho deked right on Andrei Vasilevskiy and tucked home the winning tally on the left side.

Defenseman Calvin De Haan (undisclosed) logged 12:03 of ice time in his first game since Oct. 22 as Carolina won for just the fourth time in the past 17 games in Tampa (4-8-5).

The Lightning’s Nikita Kucherov stretched his goal streak to five games and points streak to nine. Ross Colton and Nicholas Paul scored. Vasilevskiy had a busy night, tying his career high with 54 saves, as his club lost for the first time in four games.

In the first of three meetings this season and the only one in Florida, Jarvis ripped a wrister from the left circle by Vasilevskiy as the first power play ended. His third goal of the season came at 8:29 on an assist from Paul Stastny.

The Lightning watched Carolina outshoot them 15-9 in the period — equaling the entire shot total Tuesday by Ottawa in Tampa Bay’s 4-3 victory over the Senators.

The Lightning, which went 1-for-8 on the power play Tuesday, appeared to tally on the first of double-minor penalties by Carolina’s Jalen Chatfield in the second period. But Vladislav Namestnikov’s goal was overturned for using a kicking motion.

However, Colton put his club on the board at 5:50 when he redirected Mikhail Sergachev’s point shot. Colton’s power-play goal — his third marker thus far — tied the game at 1.

After leading a quick two-on-two rush, Paul put the Lightning up 2-1 from in close at 9:19; he bladed in a pass from Steven Stamkos. Necas’ power-play goal nearly five minutes later evened the match at 2.

On a full five-on-three power play, Kucherov whipped in the go-ahead marker with one minute remaining in the frame.

In the third, Skjei took advantage of a turnover and buried his second goal, a short-handed one at 13:34.