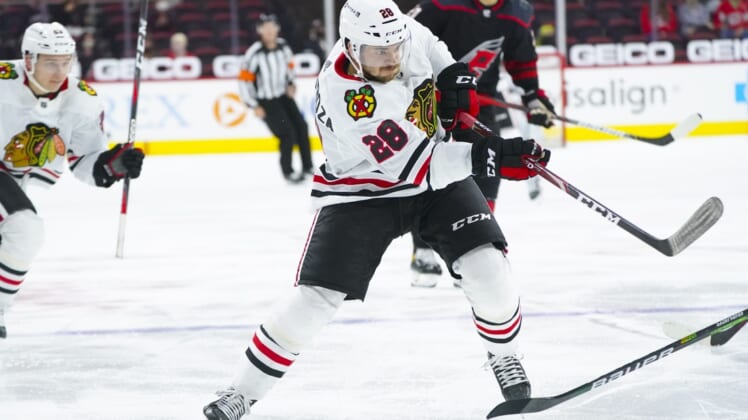 Sebastian Aho scored three goals and the Carolina Hurricanes defeated the Chicago Blackhawks 5-2 on Monday night in Raleigh, N.C., extending their points streak to 11 games in a push to finish with the best record in the NHL.

Carolina (35-10-7, 77 points) leads the Central Division, two points ahead of Florida, who also won Monday in overtime against the Dallas Stars.

Aho’s final tally came with 16 seconds remaining into an empty net for his first hat trick of the season and fourth of his career. He has a team-high 24 goals this year.

Hurricanes goalie Alex Nedeljkovic stopped 15 shots in improving to 7-0-1 in his last eight starts. At 15-4-3, he now shares the team lead for victories with James Reimer.

Trailing 4-0, the Blackhawks got on the board on Ian Mitchell’s goal with 1:25 to play in the second period. Alex DeBrincat’s team-leading 26th goal of the season came with 5:22 to play, pulling the Blackhawks to within 4-2.

Goalie Collin Delia made 19 saves for the Blackhawks in relief of starter Malcolm Subban, who stopped 14 of 18 shots before being removed.

Carolina is 8-0-3 during its points streak, including a current four-game winning streak.

The Hurricanes ended up with a 38-17 advantage in shots on goal.

Aho has a team-leading 18 multi-point games this season.

The rookie Mitchell has three goals this season, with two of those coming in Raleigh. DeBrincat has scored in three consecutive games for the second time this season.

It was the first of three consecutive games between the teams in the same building, with rematches coming Tuesday and Thursday nights as the Hurricanes round out their home schedule.