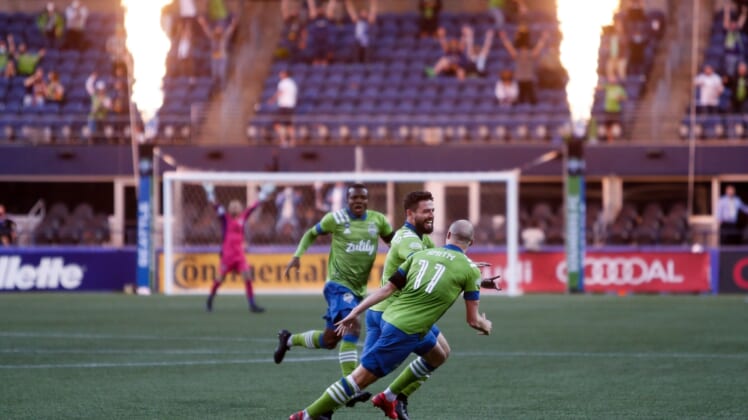 Raul Ruidiaz overcame the disappointment of missing a penalty kick by scoring twice in a three-minute span midway through the second half as the Seattle Sounders defeated visiting Minnesota United 4-0 Friday on the opening night of the Major League Soccer season.

Joao Paulo and Fredy Montero also scored for the Sounders, and goalkeeper Stefan Frei made five saves to post a shutout in the rematch of last year’s Western Conference final, which the Sounders won 3-2 by erasing a two-goal deficit with three goals in the 75th minute or later. Seattle went on to lose to Columbus 3-0 in MLS Cup, their fourth appearance in the league final in the past five seasons.

After a scoreless first half, Paulo opened the scoring in the 49th minute. A Seattle cross into the penalty area was headed away by Minnesota midfielder Wil Trapp, but the ball went right to Paulo, who volleyed the ball to himself and then struck a 30-yard sidewinder into the upper left corner of the net.

Less than a minute later, Seattle’s Cristian Roldan cleared a Brent Kallman header off the goal line to maintain the lead.

Ruidiaz made it 2-0 in the 70th minute on a 12-yard shot off a pass from Will Bruin. Ruiduiz tapped a cross from Cristian Roldan into an open net from just inside the top of the 6-yard box in the 73rd minute.

Montero, who came on as a substitute for Bruin in the 71st minute, regained the franchise record for most MLS goals with a 12-yard volley off a cross from Alex Roldan in the 86th minute. Montero, who played for Seattle from 2009-12 before re-signing in the offseason, broke a tie with Clint Dempsey with his 48th league tally for the Sounders.

Ruidiaz had a chance to give the Sounders a lead in the 29th minute, but his penalty kick was stopped by Loons goalkeeper Dayne St. Clair after a handball by Trapp in the 18-yard box.