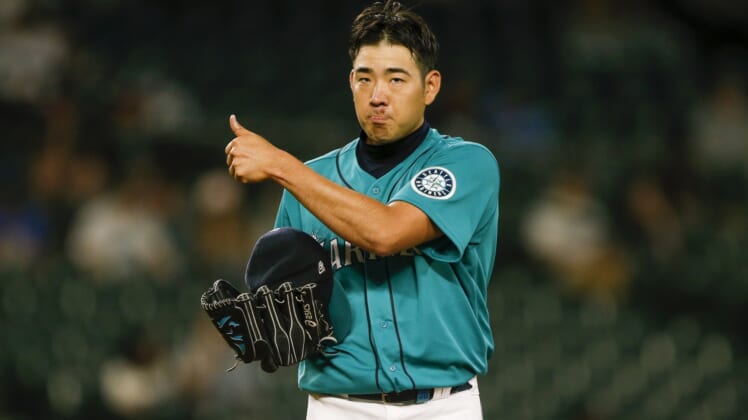 The Seattle Mariners have quietly been a team on the rise over the last two years. This season they’ve taken the next step in a profound way.

Currently 48-43, the Mariners are in third place in the American League West, three and a half games out of the second AL Wild Card seeding. They’re legitimately in AL playoff contention.

What has been the difference this season? That would be the Seattle Mariners’ starting rotation.

Last season manager Scott Servais had a serviceable rotation with upside. This season his rotation has been the driving force of their success.

Yusei Kikuchi has found himself. After a pair of rough seasons on the hill, the southpaw has been one of the best pitchers in the sport this season. He owns a 3.48 ERA and is finding success by frequently leaning on his cutter and four seamer. The Mariners have their ace.

Once an afterthought on the New York Mets’ pitching staff, Chris Flexen is pitching the best baseball of his career with the Mariners. The right-hander owns a 3.51 ERA, is inducing weak contact with a consistent four-pitch arsenal (four seamer, cutter, changeup and curveball) and surrendering few base on balls and home runs.

Rookie Logan Gilbert has gradually improved as the regular season progresses, logging strikeouts at a plausible rate and most recently tossing seven shutout innings against the New York Yankees. Prior to hitting the injured list in June, Justin Dunn was getting in a groove and has shown glimpses of being a capable rotation fixture in years past.

At full force, this is a young, ever-improving rotation. For the moment, it’s the featured element of the Mariners’ operation.

This offense is a combination of power-happy veterans and underachieving youngsters. Mitch Haniger, Kyle Seager and Jake Fraley have been blasting home runs. J.P. Crawford and Ty France are doing a plausible job at getting on base.

As for the youngsters as a whole, Dylan Moore, Taylor Trammell, Tom Murphy, Evan White and Shed Long Jr. have all struggled to put the ball in play. Kyle Lewis, arguably the Mariners’ best player, resides on the injured list.

Despite this team’s offensive futility, they’re winning, and that’s because teams can overcome a lacking lineup with reliable starting pitching. The latter keeps teams in games and allows for wiggle room when it comes to getting runs on the board. Starting pitching keeps the game close, and the bullpen shuts the door in the late innings, as long as there’s a shred of competency at the plate.

In Seattle’s case, their lone offensive bright spot is their ability to hit the long ball; they’re tied for 13th in MLB in home runs. They’ve pushed runners across home plate at opportune times and are doing just enough to win.

Sure, the Milwaukee Brewers look good, but in reality they’re winning with half their roster lagging in production and performance. You may be wondering why we’re mentioning the 53-39 Brewers. Well, the Brewers have been an enhanced version of the Mariners this season. Their starting rotation has been electric, and their high-profile offense is 29th in MLB in batting average (.220).

The point? Seattle can compete for the playoffs. Furthermore, they have the potential to improve when taking into account the raw nature of their offense. Frankly, they can only play better. Maybe Kyle Lewis makes a second-half return, adding a jolt to the offense?

It’s more sustainable to win with sturdy starting pitching and a lacking offense, as opposed to a lacking rotation and a high-octane offense. Teams find themselves trying to hit their way into games and more often than not coming up short. The Kansas City Royals have been the poster child over the last three years for that model failing to pay dividends.

Seattle’s 4.62 rotation ERA is exaggerated because of the struggles of veteran Marco Gonzales, who owns an eye-popping 5.88 ERA. If Gonzales, who has been a smooth commodity in recent memory, can get back on track down the stretch, he’ll further improve the Mariners’ pitching staff. A young rotation would very much benefit from a hurler who has been there, done that. Variety is pivotal for a modern-day pitching staff.

The Mariners are within striking distance of ending their 19-year playoff drought and have 13 head-to-head matchups remaining with the rival Oakland Athletics, who they’re chasing for the second AL Wild Card seed. Seattle controls its own destiny. The model for success is present. It’s a matter of their offense picking up the slack a bit while the team’s identity is preserved.