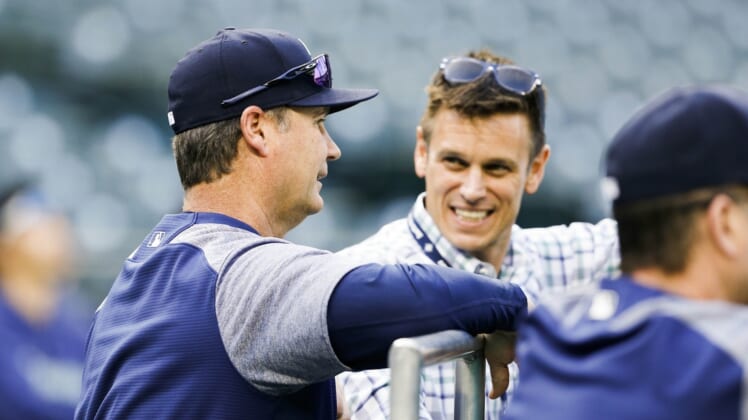 Seattle Mariners leaders expressed their dismay on Tuesday and vowed to move on positively from comments made by former team CEO and president Kevin Mather, who resigned Monday after his insulting comments toward some players and groups were made public.

“It’s been a difficult couple of days … for our players, for our staff, for me, our baseball operations team, and all of the Mariners, that’s the reality,” general manager Jerry Dipoto said in an unscheduled video conference call with reporters. “I think the most important thing was to spend some time with you, answer the baseball questions, and just re-humanize our players.”

Mather spoke earlier this month via Zoom with the Breakfast Rotary Club in the Seattle suburb of Bellevue. His comments were made public over the weekend, and Mather apologized Sunday night. He commented on everything from poor English skills among some foreign-born players to the manipulation of service time.

Dipoto said Tuesday that team leaders need to show their commitment to the players.

“We need to be sensitive and make sure that they understand where we are, and frankly to address the stigma that’s now associated with our team, which I don’t think is the way we see ourselves, and that includes our players and our staff,” Dipoto said.

“It’s something I hope we’re able to shed pretty quickly and get back to who we are. But we can’t get beyond the situation that exists today. And we have to address it head on.”

“I’m very grateful for how they’ve handled everything that’s happened in the last 48-72 hours, and it doesn’t surprise me,” Servais said about the players. “It really doesn’t. We talk about doing the right thing, and they continue to do it and it’s because of the character of this group.

“We talk about character, and what adversity does. Adversity doesn’t build character, it reveals it. And I really like what I’ve seen in how we’ve handled this so far. It hasn’t been easy.”