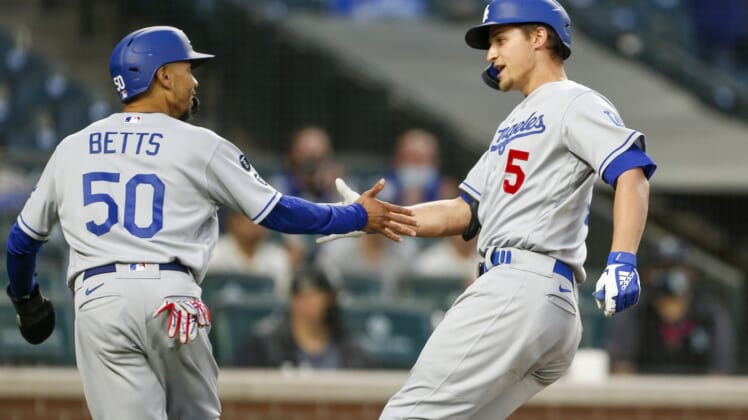 Corey Seager homered for the Dodgers, who took their second consecutive defeat after an eight-game winning streak.

Seattle relievers Will Vest, Anthony Misiewicz, Kendall Graveman and Rafael Montero combined for 3 1/3 scoreless innings, with Montero getting out of a jam in the ninth for his third save.

With one out, Montero walked No. 9 hitter Edwin Rios, who was batting just .138, on a 3-2 pitch. That brought up Mookie Betts, who reached when Montero hit him with a pitch near the batter’s right wrist. Betts sat on the ground in the batter’s box in obvious pain and was attended to by the Dodgers’ trainer before taking his base, putting runners at first and second.

However, Montero got Seager to ground into a double play, second baseman Sam Haggerty to shortstop J.P. Crawford to first baseman Evan White, to end the game.

Dodgers right-hander Dustin May (1-1) gave up four runs (three earned) on four hits in five innings. He walked one and struck out eight.

Marmolejos got the Mariners going early, lining a two-run shot to right field with two outs in the bottom of the first after Ty France singled.

Trammell, a rookie, made it 3-0 with a solo shot to center in the second.

The Dodgers got a pair of runs in the third, as Betts doubled with two outs and Seager hit the next pitch over the wall in straightaway center.

The Mariners made it 4-2 in the fourth with an unearned run. With two outs, Luis Torrens reached on a fielding error by Dodgers second baseman Chris Taylor. Trammell then lined a 3-2 pitch for a run-scoring double to right.

The Dodgers again pulled within a run in the sixth. Justin Turner led off with a walk and Taylor was hit by a pitch an out later. With two down, Zach McKinstry lined a run-scoring single to center.

That was it for Sheffield, but the Mariners’ bullpen was able to close out the victory.