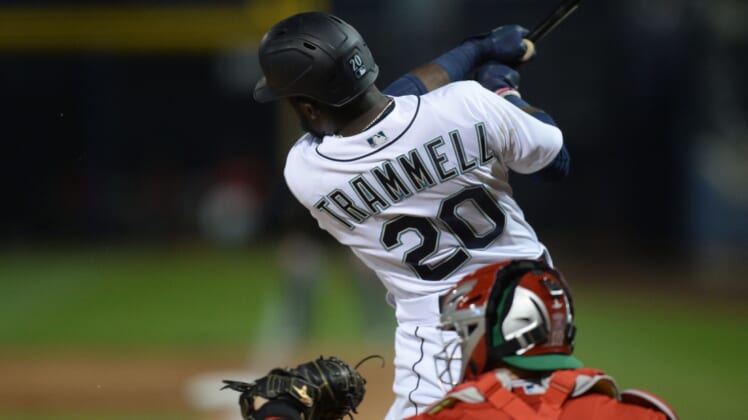 Jake Fraley drew a bases-loaded walk with no outs in the bottom of the 10th inning to give the Seattle Mariners an 8-7 victory against the visiting San Francisco Giants in the season opener Thursday night.

Giants left-hander Jose Alvarez (0-1) walked all three batters he faced in the 10th to take the loss.

Mariners left-hander Anthony Misiewicz (1-0) pitched the 10th for the win. Mitch Haniger made a sliding catch down the right-field line to end the top of the inning.

Trailing 6-1, the Mariners scored six runs in the bottom of the eighth to take the lead. The key hit was a two-run double down the right-field line by Dylan Moore, pulling Seattle within 6-5.

Fraley was hit by a pitch to reload the bases, and pinch-hitter Jose Marmolejos hit a grounder to first baseman Brandon Belt who, in his haste to start an inning-ending double play, threw wide of second base, the ball glancing off the end of shortstop Brandon Crawford’s glove and into left field, allowing the go-ahead run to score.

Giants pinch-hitter Alex Dickerson led off the top of the ninth with a homer to right-center off Mariners closer Rafael Montero to tie it at 7-7.

San Francisco’s bullpen wasted a strong start by right-hander Kevin Gausman, who allowed just two hits — both opposite-field doubles — and one run over 6 2/3 innings. He walked two and struck out six.

Gausman retired the first 11 batters he faced before Kyle Seager lined a double down the left-field line with two outs in the fourth.

The only other hit the right-hander allowed was a leadoff double to Evan White on a liner just inside the first-base bag in the seventh. White moved to third on a groundout to first by Taylor Trammell and scored on Dylan Moore’s sacrifice fly to center.

There were 9,000 fans at T-Mobile Park, per Washington state COVID-19 protocols.