Seattle Mariners come from behind to edge Rangers 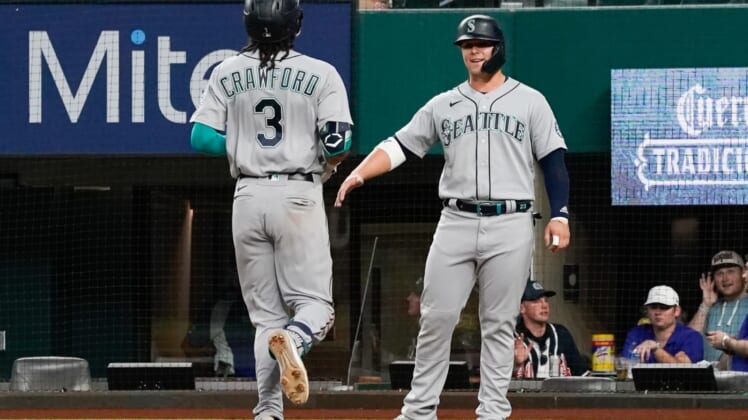 Mitch Haniger singled home the go-ahead run in the seventh inning as the Seattle Mariners rallied to defeat the Texas Rangers 5-4 Friday night in the opener of a three-game series in Arlington, Texas.

Nate Lowe crushed a solo shot 450-plus feet to straightaway center field for the Rangers.

With the score tied at 4-4 and two outs in the top of the seventh, the Rangers brought in Josh Sborz (3-2) to face Taylor Trammell. The move backfired, as Trammell doubled down the left field line. Haniger grounded a single into left to bring home the tiebreaking run.

Mariners starter Chris Flexen (3-1) settled down after allowing runs in each of the first three innings to get the victory. Flexen went 6 1/3 innings and gave up four runs on 10 hits with one walk and two strikeouts. He helped his own cause by twice picking a runner off first base.

Seattle’s Anthony Misiewicz pitched 1 2/3 innings of scoreless relief, twice inducing double-play grounders, and Kendall Graveman struck out three in the ninth for his fourth save of the season.

Texas scored two runs in the first. Willie Calhoun led off with a line-drive single, and Nick Solak followed with a run-scoring double to left. With two outs, Adolis Garcia grounded a single into right to bring home Solak.

Crawford led off the top of the second with a single, and Moore followed with a home run to left-center field to tie the score at 2-2.

The Rangers regained the lead in the bottom of the inning. With one out, Isiah Kiner-Falefa grounded a single to center and Charlie Culberson walked. An out later, Calhoun lined a run-scoring single to left to make it 3-2.

Lowe homered in the third to extend the lead to 4-2.

The Mariners tied it in the fourth as Ty France led off with a double and Crawford followed with a home run to right field, his first of the season.