Sean Murphy breaks out of slump, helps A’s past O’s 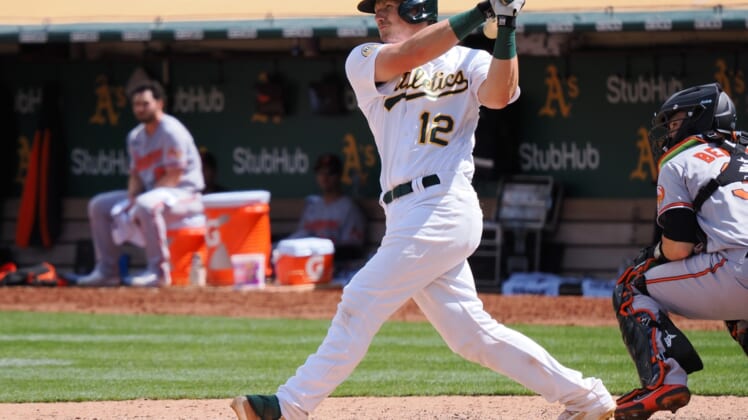 Sean Murphy snapped out of a season-opening slump with a home run, a double and a single and Cristian Pache belted his second homer Thursday afternoon as the Oakland Athletics beat the Baltimore Orioles 6-4 for a third win in an attendance-challenged four-game series.

A second straight afternoon affair drew an announced crowd of 4,429, meaning a total of 10,880 witnessed the final three games of the series after Oakland’s home opener drew 17,503 on Monday.

In a series that had been dominated by pitching — neither team had homered in the first three meetings — the A’s not only homered twice but got doubles from four different players.

Murphy, one of Oakland’s top holdovers after hitting 17 homers last season, had begun the series 1-for-11 before flying out with a runner in scoring position in the bottom of the first Thursday.

But the standout catcher later contributed a single to a two-run third, a two-run homer in the fifth and an RBI double in a two-run seventh, raising his average to .259 after a 3-for-4 day that included three RBIs.

Pache’s homer led off the third and opened the scoring against Orioles starter Tyler Wells (0-2), who lasted just 2 1/3 innings, charged with two runs on five hits. He didn’t walk anyone and recorded one strikeout.

Sheldon Neuse drove in Oakland’s other two runs with RBI singles in the third and seventh.

Neuse also doubled in the first, giving him a third three-hit game in his three-year career to go with a four-hit performance in 2019.

Tony Kemp had a single and a double and scored twice for the A’s, whose 11 hits were their second-most of the season. They had totaled 19 hits in the first three games of the series, which they began with 5-1 and 2-1 wins.

Paul Blackburn (2-0) earned the win for the A’s, allowing just one run and three hits in five innings. He struck out four and did not issue a walk.

Dany Jimenez, Oakland’s sixth pitcher, protected a two-run lead with a 1-2-3 ninth with two strikeouts for his second save.

Austin Hays had an RBI double in the fifth and an RBI single in a two-run seventh that got the Orioles within 4-3. Rougned Odor also had a run-scoring single in the seventh.

After Oakland countered with two in their half of the seventh, Baltimore completed the day’s scoring on a sacrifice fly by Ryan McKenna in the eighth.

Ryan Mountcastle scored twice for Baltimore, which completed the first of three series on a 10-game trip.