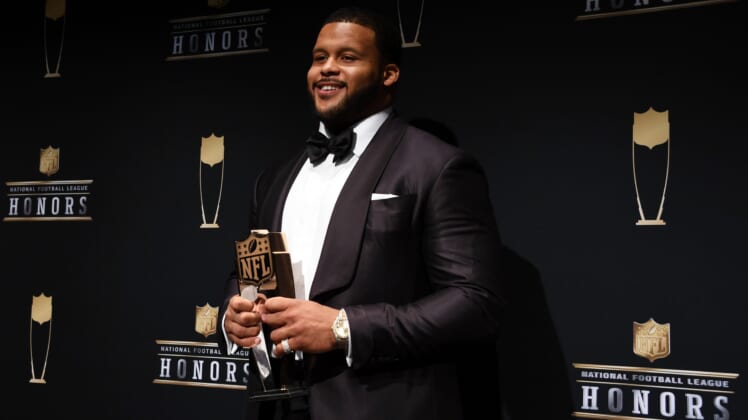 The Los Angeles Rams continue to express optimism about contract negotiations with star defensive tackle Aaron Donald, who continues to hold out absent a new deal.

Last week, general manager Les Snead hinted that a contract would be hammered out sooner, rather than later. Then on Saturday, Rams head coach Sean McVay mirrored the GM’s comments with a statement of his own on the matter.

“There’s been — let’s put it this way, there’s increased dialogue,” McVay told reporters Saturday, via the Rams’ official website. “There’s more — we feel positive about the direction that these things are going.”

Last year, the team not surprisingly picked up his fifth-year option, which would pay him just under $6.9 million in 2018.

There’s been rumors that Donald, set to enter the fifth year of his rookie contract, will not show up and play at all for Los Angeles without a long-term deal. The Rams are taking his threat to sit out the season seriously, it would seem.

“I think there’s a level of urgency that’s being displayed from us,” McVay said. “I know that they know how much we value him and appreciate Aaron. Hopefully, we’ll see some things change on that front sooner than later, but it’s still kind of in the same boat.”

Donald held out of camp all summer in 2017 and even missed two games to open the year afterward. Yet the former first-round pick out of Pitt was so dominant in the 14 games he played that he took home Defensive Player of the Year honors, racking up 41 tackles, 11 sacks and five forced fumbles.