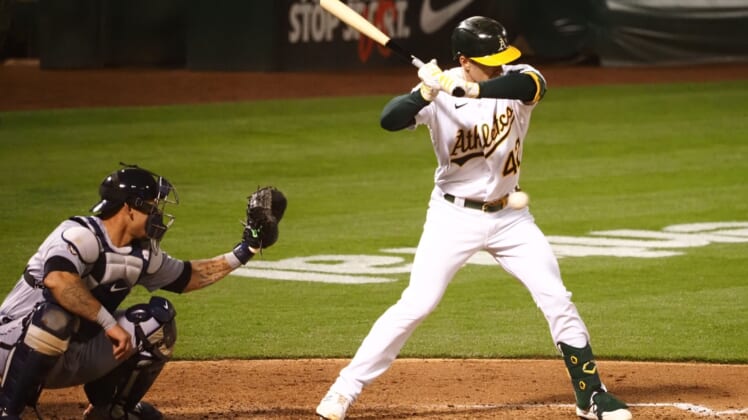 Left-hander Sean Manaea struck out seven in six strong innings as the Oakland Athletics opened a four-game series against the visiting Detroit Tigers with an 8-4 victory on Thursday night.

Matt Chapman provided the key hit of a four-run sixth, a two-RBI double, as Oakland won its fifth game in a row.

Stephen Piscotty and Matt Olson belted solo home runs for the A’s, who at 6-7 are back to within one game of .500 after an 0-6 start.

Niko Goodrum had three hits, including his first homer of the season, for the Tigers, who were coming off a three-game sweep in Houston.

Manaea (1-1) limited the Tigers to two runs on five hits and no walks.

He appeared headed to the clubhouse with just a 3-2 lead before the A’s took advantage of the wildness of the Detroit bullpen in the sixth-inning outburst.

Detroit’s Joe Jimenez walked three of the four men he faced to open the inning before Alex Lange came on to walk Ramon Laureano, forcing in a run.

Chapman followed with his double to left-center, pushing the lead to 6-2.

Two more walks, one issued by Lange to Olson and another issued by Tyler Alexander to Sean Murphy, forced in the inning’s fourth run.

Jed Lowrie added an RBI single in the seventh to wrap up the Oakland scoring.

Tigers starter Tarik Skubal (0-2) struggled with his control, walking four in four innings. However, he limited the damage to the homers by Piscotty, his second of the season, in the third inning, and Olson, also his second, in the fifth. The homers were the only two hits allowed by the left-hander, who struck out five.

Willi Castro tripled home a run and scored on a Jonathan Schoop sacrifice fly in the ninth to cap the game’s scoring.

Castro finished with a triple, a double and two RBIs to join Goodrum in the multiple-hit category for the Tigers.

With two singles that raised his average to .348, Lowrie was the only member of the A’s with two or more hits. Oakland was out-hit 9-8.