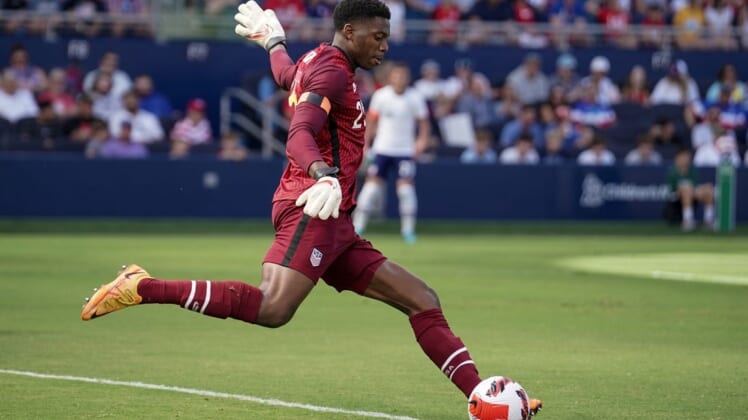 Sean Johnson made three saves in his return to the U.S. men’s national team during a 0-0 tie against Uruguay in Kansas City, Kan. on Sunday.

Johnson, making his 10th appearance for the USMNT in 11 years but first since Feb. 1, 2020, made a kick save with his right shin on Darwin Nunez from a close-range shot in the 66th minute.

Nunez had another crack at Johnson in the 92nd minute but his free kick was less difficult to handle. A minute later, Edinson Cavani, Uruguay’s second all-time scorer, was unmarked but missed the net from 12 yards.

The match against the 13th-ranked team in the world was likely the toughest for the No. 15 Americans prior to the World Cup in Qatar in November.

The Americans had more chances in the first half, led by Jesus Ferreira of FC Dallas. He had a clean look in the 19th minute from the set-up by Christian Pulisic but his attempt was easily stopped by Fernando Muslera (three saves).

Two minutes later, Ferreira headed a cross by DeAndre Yedlin off target. Prior to those two, Weston McKennie tried to bicycle Pulisic’s service to no avail.

There were opportunities for early scoring by Uruguay, as well. In the 10th minute, off a flurry in the box, Yedlin made a goal-line clearance of the shot from Diego Godin.

Johnson made his lone save of the opening 45 minutes against Manuel Ugarte, who tried to coax a shot under the crossbar in minute 23.

The match took a weird turn when Uruguayan coach Diego Alonso used a seventh substitute, Facundo Pellistri, in the 68th minute, rather than the standard six for a friendly.

The Fox broadcast said Alonso may have misinterpreted the use of unlimited substitution windows for being able to insert as many players as he wanted.