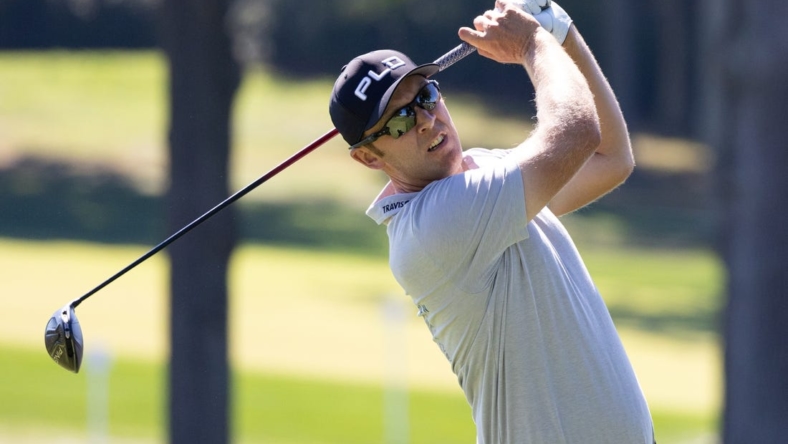 Ireland’s Seamus Power has turned a consistent weekend into a share of the lead heading into Sunday’s final round of the Butterfield Bermuda Championship at Southampton, Bermuda.

Power delivered his third consecutive 6-under-par 65 on a windy Saturday and is tied for the top spot with Ben Griffin at 18-under 195 through three rounds for a two-shot advantage. Griffin grabbed a share of the lead with a 5-under 66.

Chinese Taipei’s Kevin Yu (67 on Saturday) and Australia’s Aaron Baddeley (68) were tied for third place at 16 under. Brian Gay fired his third consecutive 66 and is alone in fifth place at 15 under.

Power was cruising Saturday at 6 under through 12 holes before a double-bogey at the par-3 13th hole. He rallied with a pair of birdies at 16 and 17.

“Did a lot of good things, putted really nicely,” Power said. “And I’m kind of — you know, proud of yourself sounds funny, but having that double bogey kind of to start a tough stretch and I was able to hang in there and actually get (the shots) back, so that was a huge bonus.”

Not even the wind could prevent Power from another 65.

“It was just one of those kind of days, your imagination had to keep working,” Power said. “Your focus and trust had to be there and mine was for the most part.”

Griffin had a strong start, going 5-under through 12 holes. But the PGA Tour rookie also had a stumble at the wind-battered 13th hole that overlooks the ocean, recording a bogey 4. He followed with four consecutive pars before getting the shot back with a birdie 3 at 18.

“Honestly, I feel like I kept it in play a lot and gave myself a lot of good looks, so I felt like I played a relatively clean round,” Griffin said. “In these conditions I feel like some guys could get themselves on difficult sides of the golf course and I did a really good job of kind of keeping it in the right spot.”

While Power is chasing his second PGA Tour victory, the 26-year-old Griffin has yet to earn a title.

“It’s going to be a ton of fun playing (the final round) against an Irish lad who’s going to hit a lot of stingers and knows how to play this type of golf (in the wind),” Griffin said. “I’m very excited for the opportunity.”

Yu navigated the 13th hole with a par but had bogeys at Nos. 15 and 16 before getting those shots back with birdies at the final two holes.

Baddeley also had a par at 13 but had a bogey at 15 before making up that shot with a birdie at 17. Baddeley is trying to become the first Monday qualifier to win a PGA Tour event since 2019.

Gay, who won the Butterfield Bermuda Championship in 2020, is looking to become the first multiple-time winner of the event.

After taking a one-shot lead through two rounds, Ben Crane stumbled with a 2-over 73 and was in a four-way tie for ninth place at 12 under.