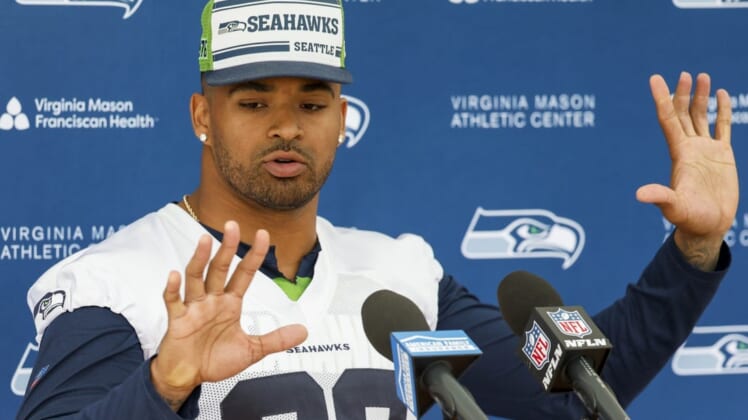 Adams has undergone surgeries in each of the past two offseasons to repair the middle and ring fingers on the left hand. He has stated that he has dislocated each finger at least 10 times.

“He just felt something that didn’t feel right, and so he’s got to get it checked out,” Carroll said. “He’s really concerned. He’s really upset that he has to miss anything, but he jumped right at the chance to … take care of it and see what’s going on right now.”

Carroll didn’t know the level of seriousness of the situation.

“He’s getting some opinions about it,” Carroll said, “so we’ll see what that means. I don’t know right now … but he’s looking at some stuff and trying to get things figured out.”

Adams told reporters during last month’s minicamp that he “played with one arm for damn near two years.” Adams also underwent a procedure on his left shoulder for the second straight offseason after he missed Seattle’s final five games.

The three-time Pro Bowl selection said the fingers were fused at an angle in which he can no longer bend the hand into a fist.

“It’s for the love of the game,” Adams said during a press conference last month. “Been going through that for two years now. My first year when I got here, I dislocated my ring finger probably about 10 times, and the other one probably about … 12.”

Adams, 26, is entering his third season with the Seahawks. He missed nine games due to injuries in his first two campaigns.

The LSU product spent his first three NFL seasons with the New York Jets before being traded to Seattle prior to the 2020 season.

Adams, known as a strong blitzer, has 21.5 career sacks but didn’t record a single one last season in 12 appearances. He has recorded seven forced fumbles, four interceptions and 443 tackles in 70 NFL games.