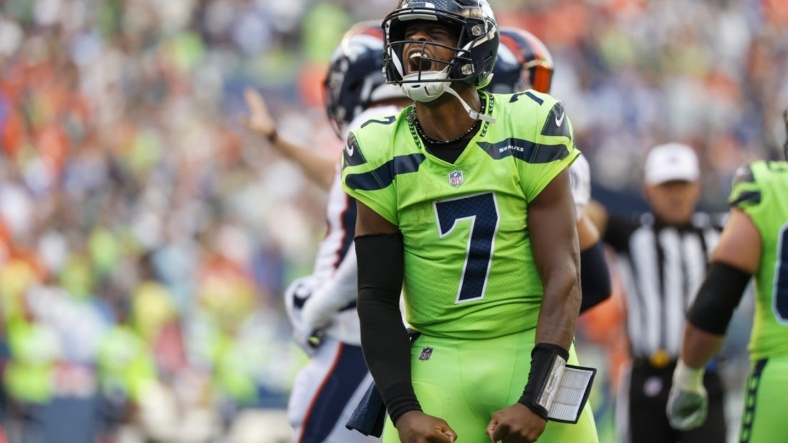 Consider Geno Smith the early leader for the NFL’s quote of the year.

After engineering the Seahawks’ 17-16 victory against Denver in Russell Wilson’s return to Seattle on Monday night, Smith was asked by a sideline reporter about his doubters after making his first opening-week start since 2014.

“They wrote me off, I ain’t write back though,” Smith said.

The Seahawks, predicted by almost everyone to finish last in the NFC West, instead became the lone team in the division to win their opener.

Seattle will now look to stay atop the division when it faces the San Francisco 49ers on Sunday afternoon in Santa Clara, Calif.

Smith, who served as Wilson’s backup with the Seahawks the previous two seasons, was generally mistake-free in the opener, completing 23 of 28 passes for 195 yards and two touchdowns.

“It was just another win, great win, with the team,” Smith said. “I love the way our guys stood up. I love the passion we played with, and we just have to keep that going.”

Seattle’s defense made two goal-line stands in the second half and limited Denver to a pair of field goals on four trips to the red zone.

Linebacker Uchenna Nwosu made seven tackles, had one sack, forced a goal-line fumble and was named NFC Defensive Player of the Week.

“It was sensational, man,” Nwosu said of his Seattle debut after being signed away from the Los Angeles Chargers in the offseason. “You hear about (the noise at Lumen Field) all the time, but to experience it for yourself is something different. That crowd was amazing today, they were great for us. They really helped us out there. We appreciate them so much.”

The 49ers lost their opener 19-10 Sunday at Chicago despite scoring the game’s first 10 points.

Trey Lance, in his first game since being named the starter, was 13 of 28 for 164 yards on a sloppy day at Soldier Field and threw a costly interception.

“Just too many mistakes I still have to clean up, for sure, for me,” Lance said. “But, man, excited. Still got my head up. Excited to get ready to go next week.”

The 49ers lost top running back Elijah Mitchell to a knee injury that’s expected to sideline him for at least a month and tight end George Kittle didn’t play because of a groin injury. Kittle has continued to miss practice this week.

Jeff Wilson Jr. is expected to get most of the carries in Mitchell’s absence.

“Jeff is just such a good football player,” 49ers head coach Kyle Shanahan said. “Anything that we ask him to do, he does. Whether it’s our third-down back, whether it’s playing the fullback role when our wideouts have the ball, in the pass game, in the run game, he’s been a starter for us, and Jeff, he’s just a very reliable guy.”

Rookie running back Kenneth Walker III was a full participant after missing the opener with a hernia and Carroll said he hopes the former Michigan State standout will make his NFL debut Sunday.