Seahawks pour it on late to knock off Cardinals 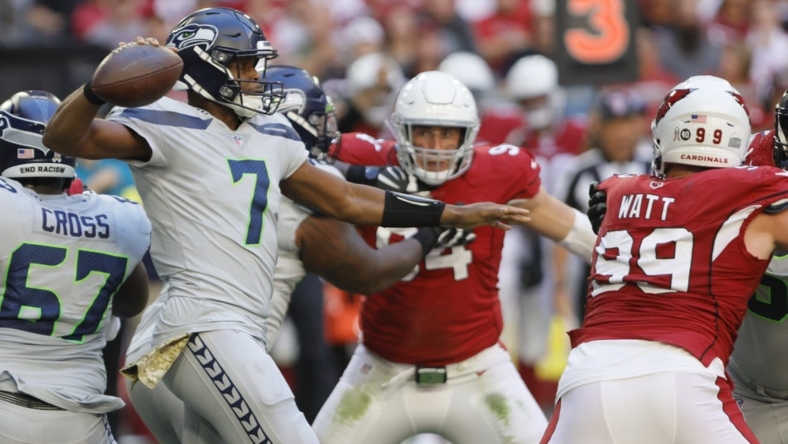 Geno Smith threw two touchdown passes while overcoming a pick-6 to lead the Seattle Seahawks to a 31-21 victory against the Arizona Cardinals on Sunday afternoon in Glendale, Ariz.

The last-place Cardinals (3-6) lost their second in a row and for the fourth time in their past five games.

Smith completed 26 of 34 passes for 275 yards, with touchdowns of 4 yards to DK Metcalf in the second quarter and 9 yards to Tyler Lockett in the third. Smith also rushed for 38 yards on six carries, converting two first downs with his legs on a drive that culminated in Walker’s 1-yard touchdown run with 7:32 remaining to give the Seahawks a 24-14 lead.

Arizona’s Kyler Murray was 25-of-35 passing for 175 yards and two touchdowns while rushing for a team-high 60 yards on eight attempts.

Murray led a nine-play, 83-yard touchdown drive on Arizona’s opening possession, capped by a 22-yard pass to DeAndre Hopkins, the first time in 14 games the Cardinals scored a TD the first time they had the ball.

Walker scored on a 5-yard run with 2:14 remaining to help clinch the victory.

The Cardinals’ Zaven Collins made a leaping interception on a screen pass and returned it 30 yards for a score with 9:18 left in the third quarter, giving Arizona a 14-10 lead. It was the Cardinals’ league-leading fifth defensive touchdown this season.

After the pick-6, Smith guided the Seahawks to touchdowns on their next three possessions before taking a knee in victory formation the last time they had the ball.

Seattle’s defensive effort was led by linebacker Jordyn Brooks, who made a game-high 12 tackles, including 11 solo stops.

The Seahawks improved to 8-1-1 in their past 10 games in Arizona.