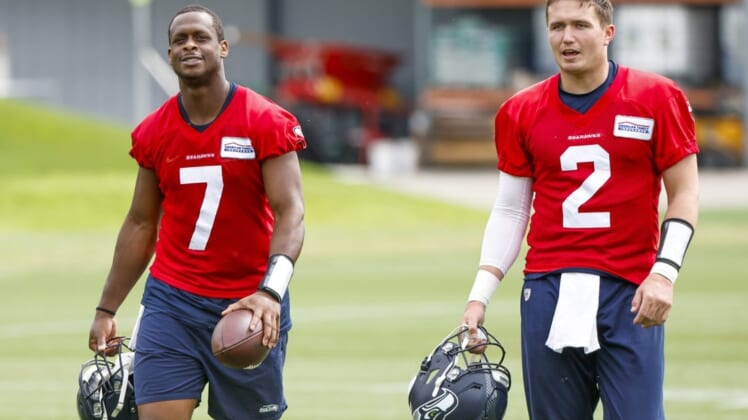 Geno Smith and Drew Lock are battling to become the Seattle Seahawks’ starting quarterback, and the competition could roll on for a while.

The team plans to use as much time as is needed to come up with the right decision, coach Pete Carroll said on Tuesday.

Carroll wouldn’t even commit to a starter for the Seahawks’ exhibition-season finale on Friday against the host Dallas Cowboys. He did confirm that Smith remains on top of the depth chart at the moment, but that’s due in part to Lock missing last week’s preseason game after testing positive for COVID-19.

“I’m wide open for whatever happens,” Carroll said. “Geno has been the guy in the lead position the whole time and protected that thought throughout. He’s done a really nice job, he’s been very consistent. So we’ll just see what happens. And there’s two more weeks of practice too after this. I had a set thought on what we would do with the timeline, but that got disrupted (with Lock testing positive for COVID), so we’re going to use all the time we need.”

The Seahawks have a day longer than most teams to prepare for the regular season as they open on the first Monday of the campaign, Sept. 12, against the Denver Broncos and former Seattle QB Russell Wilson.

“I’m not closing the book on anybody competing for their spots,” Carroll said. “We have two enormous weeks coming up. The finish of this one, next week is a huge week for us, then we come back with another full week, and an extra day. So we’ve got a lot of time here to work it out on my schedule.

“Maybe you’re not feeling that schedule, but on my schedule, I’m OK.”

Smith, 31, is entering his third season in Seattle after four years with the New York Jets and single seasons with the New York Giants and the Los Angeles Chargers. He went 1-2 as a starter last year, leaving his career record at 13-21 in starts.

In 45 NFL games overall, Smith has completed 58.8 percent of his passes for 6,917 yards and 34 touchdowns with 37 interceptions.

“I could go ahead and just call it, but I want to let the guys battle and let them show where they are and let us get as much information as possible,” Carroll said. “Geno’s done a really good job of being in that position. His voice is solid. He’s on point all the time. He’s been very consistent with his work all of that, and Drew has been really sharp.

“I know it’s not supposed to be a good situation when you have two quarterbacks. It means you don’t have one, is the old saying. I don’t know that. We might have two ones. We’ll see what happens.”