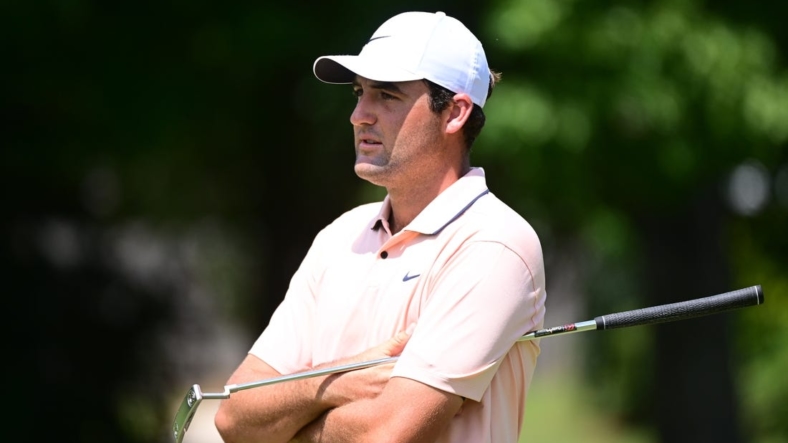 With some of the best players in the world on his tail, Scottie Scheffler saw his advantage shrink to two shots Friday at the second round of the Tour Championship at East Lake Golf Club in Atlanta.

Scheffler’s 4-under-par 66 in Friday’s second round got him to 19 under, but playing partner Xander Schauffele, buoyed by a birdie-birdie-eagle finish, posted a 7-under 63 and jumped to 17 under. Jon Rahm of Spain also shot a 63 to move into third at 13 under.

Scheffler, the world No. 1, began the FedEx Cup finale Thursday with a two-shot edge via the season-long points race, and after one round he moved ahead by five. After a few wayward tee shots down the stretch Friday, he left the door cracked open for Schauffele to make his charge.

Scheffler led the field by as many as eight strokes early in Friday’s round. He birdied Nos. 2, 3 and 6 to reach 18 under while Schauffele was slower to get going.

But Schauffele shot 6-under 29 on the back nine, while Scheffler birdied No. 12 before slowing down with six straight pars. He missed the fairway at Nos. 13 and 14, then left his tee shot at the par-3 15th short, barely avoiding the water hazard.

Schauffele rolled in birdie putts at the 16th and 17th holes, but his most impactful swing came at No. 18.

Scheffler found rough off the 18th tee once again and struggled his way to par. Schauffele placed a 350-yard drive at the edge of the fairway, then carried both a water hazard and multiple greenside bunkers onto the green just 5 feet from the pin.

His straight-ahead eagle putt sliced a four-shot deficit in half.

Rahm, who began the tournament 3 under and seven shots behind Scheffler, is giving chase for the second straight year after he challenged eventual champion Patrick Cantlay at East Lake in 2021. Rahm birdied five of his first eight holes en route to his 63.

Max Homa posted the lowest round of the week with an 8-under 62 to leap into a tie for eighth at 9 under. He was joined by Tom Hoge (66) and Cameron Young (67).

Like Rahm, Homa birdied five of his first eight holes — and, like Schauffele, he played a perfect second shot at No. 18 for a 4-foot eagle tap. He finished bogey-free with six birdies and the eagle.