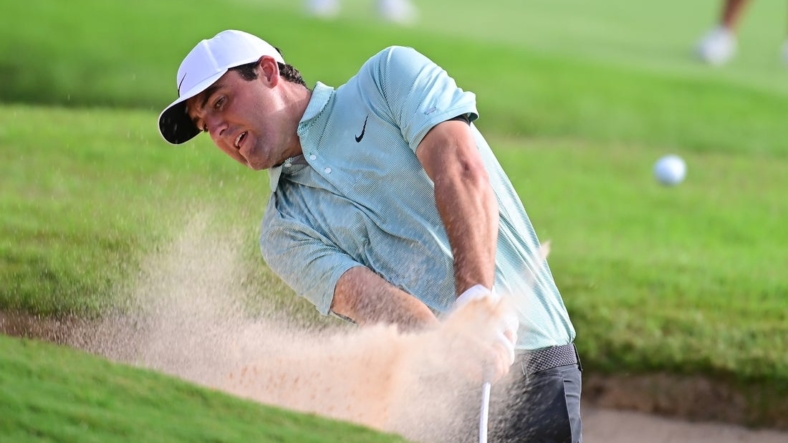 Scottie Scheffler led Xander Schauffele by one stroke and several more stars were gaining ground when third-round play at the Tour Championship was suspended Saturday evening at East Lake Golf Club in Atlanta.

Scheffler stood at 19-under par and Schauffele was at 18 under with six holes left to complete, the most of any of the 14 golfers remaining on the course. Those 14 will resume their third rounds at 9:45 a.m. Sunday, with the final round of the FedEx Cup finale to follow.

The tournament was twice delayed due to lightning strikes in the area. The first delay began at 1:27 p.m. ET, lasted 58 minutes and pushed several tee times ahead an hour.

The second delay arrived at 6:36 p.m., when sporadic lightning led to a thunderstorm over the course.

Scheffler, the world No. 1 and Masters champion, was even par for his round when play was postponed. Schauffele was 1 under.

“I was feeling all right,” Scheffler said. “I wasn’t playing my best, but I was kind of hanging in there. I was looking forward to giving myself some opportunities at the end, but then the horn went off.”

South Korea’s Sungjae Im had taken over third place at 16 under with four holes to play. Rory McIlroy of Northern Ireland was in fourth at 15 under and two holes to finish.

The horn sounded just after Justin Thomas lagged an eagle putt to 2 feet from the pin at the par-5 18th hole. Thomas is at 14 under, with a presumptive birdie tap-in awaiting him to complete what would be a 7-under-par 63 to tie the low score of the round.

Joining Thomas at 14 under were Sepp Straka of Austria (one hole to play), Jon Rahm of Spain (five holes) and defending champion Patrick Cantlay (five holes). Japan’s Hideki Matsuyama finished birdie-birdie and posted a 63 in time to beat the second suspension; he moved into ninth at 13 under.

Scheffler opened his round with seven straight pars, while Schauffele was more active. He tied the lead with birdie putts at Nos. 2 and 3, gave the strokes back with bogeys at the par-4 fourth and fifth holes, then rejoined Scheffler at 19 under by birdieing Nos. 6 and 7 — the latter on a right-to-left 33-footer.

Scheffler birdied the par-4 eighth to move back ahead. Both players found the same bunker off the tee at the par-3 11th and both missed their par putts, sliding back toward the field. It was just Scheffler’s second bogey of the tournament and his first since Thursday.

Im made his move by going 5 under in a four-hole run. After birdieing No. 5, he made a 12-foot putt to eagle the par-5 sixth for the second straight day before dialing up birdie putts on the following two holes.

But Im also made a misstep shortly after Scheffler and Schauffele bogeyed No. 11. He dropped back to 16 under with a bogey at No. 14 just before the delay commenced.

Weather permitting, someone will lift the FedEx Cup trophy Sunday and win an $18 million bonus.

“Going into tomorrow, just keep doing what I’ve been doing all week,” Scheffler said, “and just go out and try to play good golf.”