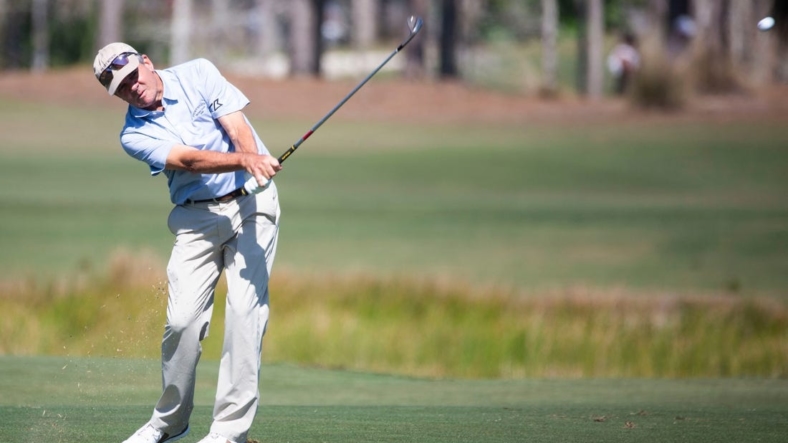 Scott Dunlap finished with a flourish Saturday by recording birdies on five of the last six holes to notch a 9-under 63 and hold a one-shot lead after two rounds of the Ally Challenge at Grand Blanc, Mich.

The 63 matches the low round in Ally Challenge history and marked the fifth time Dunlap has turned in that personal-best round. Scott McCarron shot 63 in the second round in 2018.

The strong showing leaves Dunlap at 11-under 133 after two trips around Warwick Hills Golf & Country Club. Steve Stricker, Brett Quigley and Ireland’s Padraig Harrington are all one shot back.

“This is a ball-hitter’s golf course,” Dunlap said afterward. “It’s narrow. But if you’re between the trees and in play, you have got chances. And you got to take advantage of them.”

Dunlap, 59, certainly took advantage with nine birdies in a bogey-free round to give himself a chance to win his first PGA Tour Champions event in over eight years. His last triumph was at the 2014 Boeing Classic.

Dunlap had four birdies on the front nine before turning things up a notch late in the round. He birdied Nos. 13 and 14, shot par on 15, before finishing with three more birdies.

“You never know when something like this is going to happen,” Dunlap said. “But a joy it is. Nowadays, just day a time.”

Stricker also put together a strong round with a 64. Harrington shot 66 and Quigley 68.

Stricker recorded five birdies over the first six holes and nine overall. He made one bogey, on No. 7.

Stricker said putting was the difference for him. Fellow golfer Jerry Kelly, a close friend, alerted him to some issues he was having on the green.

“Just not paying attention to some of the basics that I have been doing throughout my career,” Stricker said. “And Jerry pointed those out to me. … And I putted a lot better today. I started the ball online a lot, and had good speed, and finally made a few.”

Harrington registered six birdies during a bogey-free round. He won the Dick’s Sporting Goods Open in New York last week and isn’t sure he sufficiently recovered.

“Yesterday I struggled at the end of the round. I got really, really mentally tired. That kind of happens when you won the week before,” Harrington said. “You don’t realize how much it takes out of you. I got some good recovery in for today. And like I held it all the way through today, so I’m in a good place going into tomorrow.”

Quigley had four birdies during a bogey-free round.