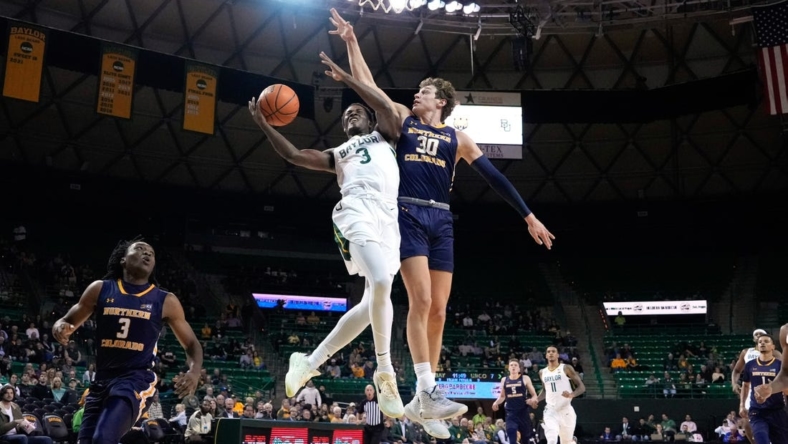 LJ Cryer scored 20 points and Jalen Bridges added 15 as No. 5 Baylor rolled to an easy 95-62 victory over Northern Colorado in nonconference play on Monday night at Waco, Texas.

The victory was the 400th at Baylor for coach Scott Drew, who is in his 20th season at the school.

Adam Flagler recorded 13 points, 10 assists and three steals for Baylor (3-0). Keyonte George contributed 12 points, seven rebounds and six assists and Dale Bonner added 12 points and six steals in a contest in which both schools use Bears as their nickname.

Baylor had a 28-4 edge in points off turnovers and 27-10 advantage in fastbreak points.

Northern Colorado’s Caleb Shaw, the nephew of Drew, had just four points on 1 of 11 shooting. He missed seven of his eight 3-point attempts.

Northern Colorado jumped out to a 5-2 lead before Flagler scored eight points and Cryer added five during a 13-0 burst to take a 10-point lead.

Northern Colorado was within 53-38 after a 3-pointer by Knecht with 15:21 left in the contest before Baylor delivered the knockout punch with a 21-1 surge.

Flo Thamba’s basket capped the run and gave Baylor a 74-39 lead with 8:13 remaining. The Baylor lead topped out at 38 points.