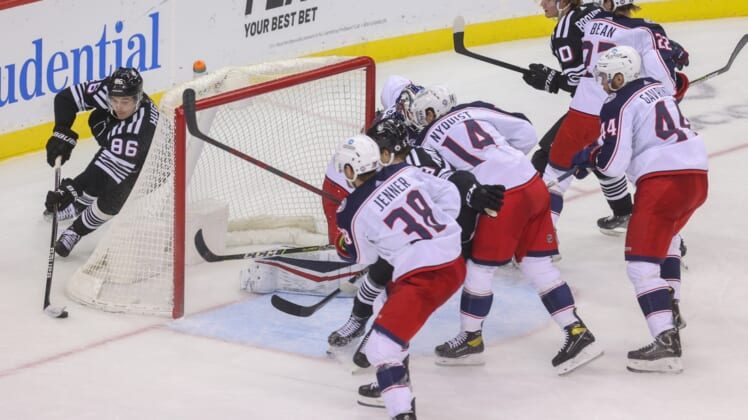 Since returning from the NHL’s extended holiday break, the New Jersey Devils have finally begun to look like a team closer to the end of a rebuilding project than the beginning.

For the Columbus Blue Jackets, the last month has been a reminder that their own overhaul is closer to the start than the finish.

The Devils will look to complete a home-and-home sweep of the Blue Jackets Saturday night, when New Jersey is slated to visit Columbus in a battle of Metropolitan Division rivals.

The Devils continued surging Thursday, when Jesper Bratt scored the tie-breaking goal early in the third period of a 3-1 victory over the Blue Jackets in Newark, N.J.

The win was the fourth in five games (4-1-0) since Dec. 29 for the Devils, who lost their final six games — all in regulation — prior to the holiday break and entered Christmas with just three wins in their previous 18 games (3-12-3).

New Jersey has missed the playoffs in each of the last three seasons and eight times in the last nine years since falling in the Stanley Cup Final in 2012.

“We were all sick and tired of losing — we felt we could play so much better than that,” Bratt said Thursday night. “We knew we could do more and we just had to look ourselves in the mirror and be honest with each other and say, ‘We’ve got to step up and we’ve got to be better.'”

No one’s been better than Jack Hughes, who missed 17 games earlier this season with a dislocated shoulder. Hughes, who was the No. 1 overall pick in the 2019 NHL Draft and is one of seven current Devils drafted by the club in the first or second round, collected just five points in the first 11 games following his return.

But Hughes has scored a point in five straight games, a span in which he has three three-point games — as many as he had in his first 130 NHL games.

“I like where my game’s at,” Hughes said. “I’m shooting the puck a lot and putting things towards the net.”

The loss Thursday continued an extended skid for the Blue Jackets, who made four straight trips to the playoffs before finishing seventh in the Metropolitan Division last year under John Tortorella, who was replaced following the season by Brad Larsen.

Seven of those 10 regulation losses have been by two goals or more for the Blue Jackets, who fell into seventh place in the Metropolitan with Thursday’s defeat.

“We had a good start, we played very simple,” Larsen said Thursday. “Then it got away from us. It’s just not good enough.”

A spate of injuries and COVID-19 cases have compounded the challenges for the Blue Jackets. Center Alexandre Texier, who missed the previous two games with what was believed to be a non-COVID illness, tested positive for the coronavirus Friday. Texier joins defensemen Zach Werenski and Gavin Bayreuther on the COVID-19 list, though Werenski has a chance to return Saturday.

In addition, goalie Elvis Merzlikins has missed the last two games with a lower-body injury while right winger Yegor Chinakhov didn’t practice Friday due to an undisclosed injury.