Xander Schauffele sank seven birdies over his first nine holes en route to a second round eight-under 64 to take a three-stroke lead at the CJ Cup in Las Vegas on Friday... 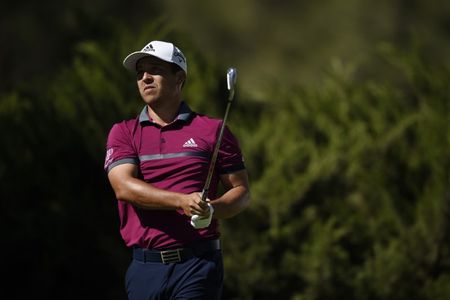 (Reuters) – Xander Schauffele sank seven birdies over his first nine holes en route to a second-round eight-under 64 to take a three-stroke lead at the CJ Cup in Las Vegas on Friday.

Starting on the back nine, the 26-year-old American birdied the 11th and then caught fire from the par-three 13th when his tee shot nearly found the cup.

He went on to make the birdie putt and card more birdies on his next five holes thanks to some outstanding putting to sit 14-under 130 halfway through the 78-player event at Shadow Creek, which has no cut.

“It was nice,” Schauffele said of his early birdie blitz.

“I had a chip-in there, two long putts. Some of those holes you’re not really trying to birdie them, you’re kind of just trying to leave yourself an uphill 35-footer and fortunately, I made a couple of them. It was a nice stretch.”

After firing a 29 over his first nine holes, he cooled off after the turn but still managed one more birdie while avoiding any big mistakes.

“I got a little bit stale there on the other side. Pace of play slowed down a lot, kind of hot, easy to let the mind wander. Upset I didn’t make more birdies but pleased I didn’t make any bogeys.”

Trailing Schauffele was overnight leader Tyrrell Hatton of England, who finished birdie-birdie to cap a round of four-under 68 to sit 11-under 133 heading into the weekend with American Russell Henley one shot further adrift.

“It was an inconsistent day,” said Hatton, who won the European Tour’s BMW PGA Championship in Surrey last weekend.

“Obviously I was disappointed with bogeys on 15 and 16. I hit a couple of poor shots there.”

The CJ Cup was switched to Las Vegas from South Korea this year because of travel restrictions imposed due to the COVID-19 pandemic.