Santa Clara ‘humbled’ to be in NIT field vs. Washington State 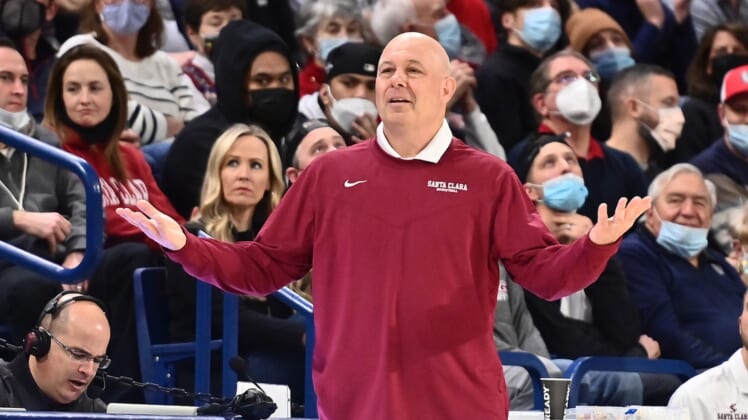 Herb Sendek has been around long enough to know Selection Sunday is all about the NCAA Tournament.

But it’s also the day bids are announced for the National Invitation Tournament. His Santa Clara team is headed for the latter, with a first-round matchup Tuesday night against Washington State in Pullman, Wash.

“I know everyone tends to focus on the NCAA Tournament. I understand, I get that,” Sendek said. “But you look at the (NIT) field and it’s humbling … there are any number of teams in this field that, given the bids, could have won a game or more in the (NCAAs). It’s a great field and a historic tournament.”

Santa Clara (21-11) gave No. 17 Saint Mary’s a scare in the semifinals of the West Coast Conference tournament before falling 75-72. The Broncos are seventh in NCAA Division I in both field-goal percentage (49.0) and 3-point shooting (38.8 percent). Jalen Williams averages 18.0 points on 51.8 percent shooting and Josip Vrankic adds 15.5 points, 5.5 rebounds and 3.2 assists per game.

“As basketball players, all we want to do is play more basketball,” Vrankic said. “We’re going (to Pullman) to win and that’s all that matters to us.”

The Cougars (19-14) will be making their first postseason appearance since the 2012 College Basketball Invitational. They last appeared in the NIT in 2011, when — led by Klay Thompson — they reached the semifinals at Madison Square Garden in New York.

“It’s hard to get in there,” WSU coach Kyle Smith said of making the NIT. “The teams that win their league (in the regular season) and don’t win their conference tournament get auto bids, so that squeezes the field down. It’s a tough tournament.”

The Cougars went right back to work after their loss to UCLA to prepare for a potential NIT bid.

“We’re going to practice and assume we’re in and be ready to go and hopefully not be let down,” Smith said.