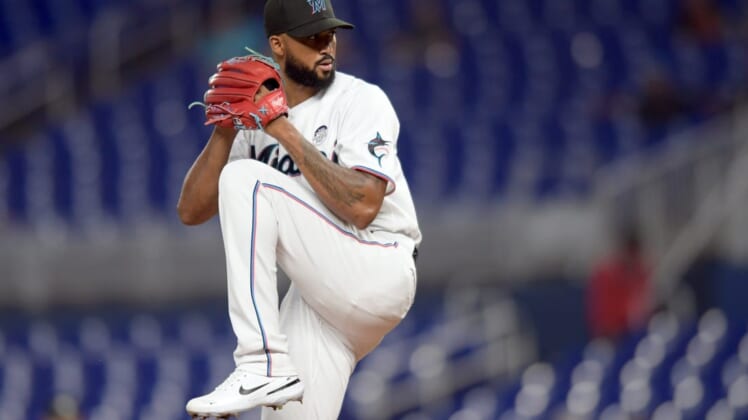 Sandy Alcantara pitched seven scoreless innings, leading the host Miami Marlins to a 3-0 win over the San Francisco Giants in the opener of a four-game series on Thursday night.

Alcantara (6-2) allowed just three hits — one double and two singles — and a pair of walks, striking out eight and throwing 111 pitches. He has won four straight starts, throwing at least 100 pitches in each of those outings.

He also has eight quality starts in 11 tries this year, including five in a row in which he has given up just three earned runs in 39 innings.

Alcantara lowered his earned-run average from 2.00 to 1.81. He currently leads the National League in both ERA and innings pitched.

Miami, which started a seven-game homestand, got one inning of scoreless relief each from Steven Okert and Tanner Scott. For Scott, it was his third career save, including two this year.

Giants shortstop Brandon Crawford was scratched from Thursday’s starting lineup due to illness.

San Francisco threatened in the first inning as Mike Yastrzemski stroked a one-out double. But Alcantara stranded that runner by getting Joc Pederson to fly out and striking out Luis Gonzalez.

Miami opened the scoring in the second as Avisail Garcia hit a leadoff single, advanced on Miguel Rojas’ walk and scored on Jacob Stallings’ hit to left.

The Marlins made it 3-0 in the sixth as Jorge Soler singled to start the rally, knocking Wood out of the game. The next batter, Jesus Aguilar, greeted reliever Camilo Doval with a line-drive RBI double that hit the chalk on the left-field line. Rojas’ two-out RBI single capped the frame.