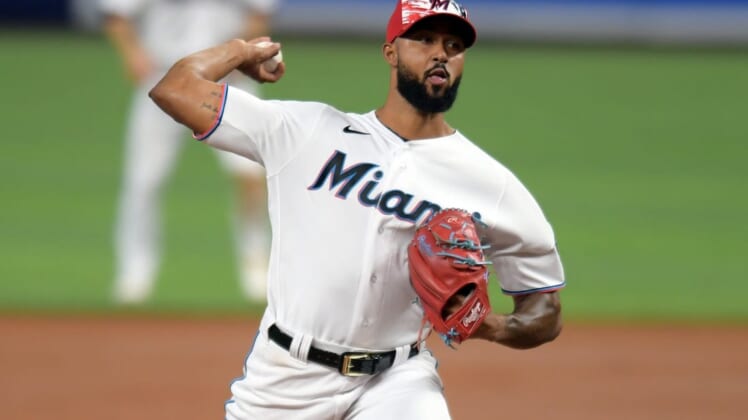 Alcantara (9-3) went eight shutout innings and was lifted after 107 pitches. He leads the major leagues with 123 1/3 innings pitched on the season.

Tanner Scott allowed a run in the ninth on a sacrifice fly by Taylor Ward, which scored Michael Stefanic. But Scott retired Jared Walsh on a line drive to center, stranding runners on first and second, for his 10th save.

Against Alcantara, the Angels managed singles by Luis Rengifo and Mike Trout.

The National League Pitcher of the Month in June, Alcantara now has a string of 11 straight starts of at least seven innings, the longest such streak since Rick Porcello’s in 2016.

Facing a top of the order of Jonathan Villar, Trout and Shohei Ohtani, Alcantara came out throwing heat. In the first inning, the right-hander touched 100 mph four times and notched two strikeouts in a 1-2-3 inning.

Alcantara held the Angels without a baserunner for 4 2/3 innings before Rengifo’s line-drive single to right.

Syndergaard entered the game having a 7-1 record with a 2.16 ERA against the Marlins. All 12 of those starts came while he was with the New York Mets.

All the damage done off Syndergaard came via the long ball. Cooper connected in the third inning, and De La Cruz went deep in the fifth.