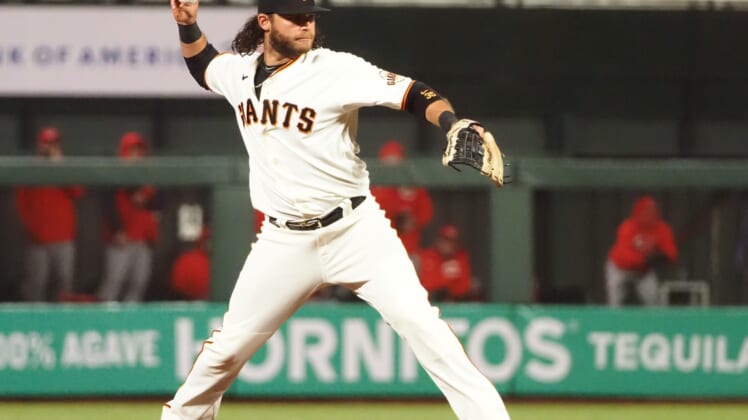 Wilmer Flores broke a seventh-inning tie with a sacrifice fly and Jake McGee extended his season-opening hitless streak Tuesday night as they combined to deliver the San Francisco Giants a 7-6 victory over visiting Cincinnati.

Joey Votto and Mike Moustakas went deep for the Reds, who have lost three of four since a 6-1 start.

The game was tied at 6-all before Cionel Perez (1-1) walked Donovan Solano and Yastrzemski to lead off the last of the seventh.

After Mauricio Dubon’s fielder’s choice grounder advanced Solano to third, he scampered home with the go-ahead run on Flores’ flyball to center field.

Tyler Rogers worked around a Eugenio Suarez double in a scoreless eighth, before McGee, who had thrown 5 1/3 hitless innings in his first six outings, worked his magic again in the ninth for his fifth save.

Jonathan India drew a one-out walk to put the potential tying run on, but McGee then struck out Aristides Aquino and Tyler Stephenson to end it.

Wandy Peralta (2-0), who gave up the game-tying run in the top of the seventh, was credited with the win.

The game calmed down and became a battle of bullpens after an explosive start in which each team hit two homers and scored four times in the first inning.

Votto and Moustakas each belted a two-run home run off Giants starter Kevin Gausman in the top of the first. The second homer for the season for each staked Reds starter Luis Castillo to a 4-0 lead.

But the Giants teed off on Castillo in the bottom half with Yastrzemski and Crawford matching the homers for a 4-4 tie. The homer was the second of the year for Yastrzemski, the third for Crawford.

After a three-hit first, Gausman settled down to allow just one more hit and one more run through six innings. He walked two and struck out seven.

He didn’t get a decision and neither did Castillo, who left after five innings with a 5-4 lead, having allowed four runs on seven hits. He struck out seven and did not walk anyone.

Longoria’s home run, his fourth of the year, highlighted a two-run seventh that put the Giants on top 6-5, only to see the Reds draw even one final time on an RBI single by Alex Blandino in the top of the seventh.

Yastrzemski, Longoria and Austin Slater had two hits apiece for the Giants, while Nicholas Castellanos had a double and a single for the Reds.