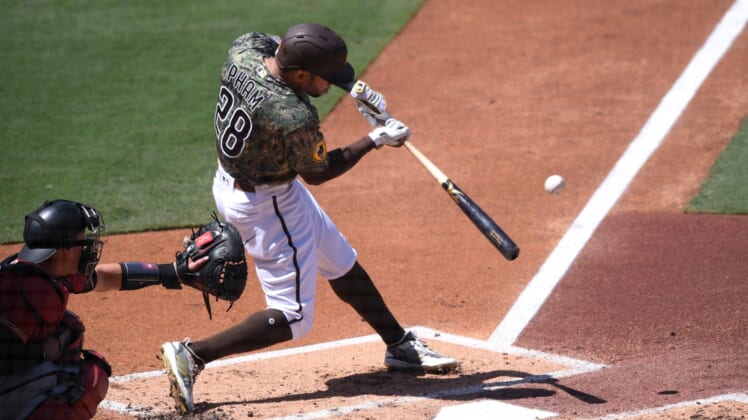 And, four games into the season, the Dodgers and Padres are tied for first in the division.

“I think we have a really solid team with a lot of all-around power,” DeSclafani said. “Everyone loves the way we plan and get ready.

“There’s no reason why we can’t be right up there at the top of this division or win it.”

DeSclafani said that as the Giants prepare for their first divisional game of the season Monday night at Petco Park in San Diego. And he’ll be starting for San Francisco in his Giants debut.

DeSclafani, who had one of the worst pitching lines in the major leagues last season, will be paired against left-hander Adrian Morejon, who is considered one of the Padres’ top prospects although he has struggled in his brief Major League career.

DeSclafani’s hopes of rebounding in 2021 with the Giants could be riding with a much-improved changeup to go with his 96-97 mph fastball. “I feel good with the changeup,” DeSclafani said at the end of spring training, where he posted a 2.79 ERA.

Offensively, the Giants, who had Easter off after losing two of three in Seattle, are paced by third baseman Evan Longoria (4-for-11, two homers, four RBIs) and catcher Buster Posey (two homers).

The 22-year-old Morejon originally signed as a member of the Padres heralded 2016 international signing class. He made his major-league debut in 2019. Last season, Morejon had a 2-2 record, 4.66 ERA and a 1.241 WHIP in nine appearances (four starts).

Morejon is in the Padres rotation to start the season because Dinelson Lamet will be rehabbing his elbow for another month. But if he weren’t in the rotation, Morejon would be adding innings to the bullpen.

“We’re projecting Adrian as a career starter,” Padres manager Jayce Tingler said. “But we know he’s capable of serving different roles. That could be as a starter, length out of the bullpen or crucial outs late in a game.

“He has the arsenal, a five-pitch mix that includes two fastballs, a slider, a curve and a pitch called the split-knuckle-change.

“Everything plays off the fastballs. When he gets those in the zone, it’s really a tough time for hitters.”

“I want to be in the major leagues,” he said. “I want to be a starting pitcher, but I will help any way I can.”