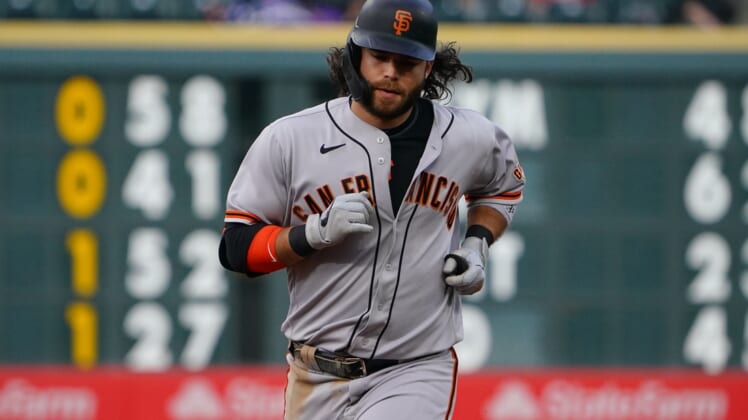 Brandon Belt hit a grand slam, singled and drove in five runs during a 10-run first inning, and the visiting San Francisco Giants beat the Colorado Rockies 12-4 in Denver in the first game of a doubleheader on Tuesday.

Belt finished with three hits, Buster Posey also homered and had two of his three hits in the first inning. Brandon Crawford also went deep among his two hits and reliever Matt Wisler (1-2) pitched 1 2/3 innings for the win.

Raimel Tapia homered and Garrett Hampson and Trevor Story had two hits each for Colorado.

The Giants jumped on starter German Marquez (1-3) in the first. Mike Tauchman led off with a double and scored on a single by Belt. Posey and Alex Dickerson followed with singles to make it 2-0 and Crawford walked to load the bases.

Wilmer Flores hit a two-run single and one out later Steven Duggar doubled to center to make it 5-0. Marquez walked Tauchman to reload the bases, ending his day.

Marquez allowed eight runs on six hits in 2/3 of an inning.

Belt greeted reliever Jhoulys Chacin with a grand slam to right-center field, his fifth home run of the season, and Posey followed with his seventh of the year to complete the rally.

It is the fifth time in franchise history San Francisco has scored 10 or more runs in the first inning. The last time it happened was June 29, 1967, at St. Louis when the Giants scored 11 runs.

For the Rockies it was the second time in club history they allowed 10 runs in the first inning, with the last time coming April 26, 2008, at the Los Angeles Dodgers. It’s the seventh time Colorado has allowed 10 or more runs in an inning.

The Rockies rallied in the fourth. Hampson, Dom Nunez and Josh Fuentes led off with singles, and after Matt Adams popped out Tapia hit a ball into the Colorado bullpen to make it 10-4. It was his fourth home run of the season.

Crawford hit a two-run homer, his fifth, in the sixth inning.