Outfielder Drew Robinson, who survived a suicide attempt last year and came back to play professional baseball, will retire after this weekend’s games and join the San Francisco Giants front office.

Robinson, 29, made the roster of the Giants’ Triple-A affiliate in Sacramento this spring, despite losing his right eye — the result of a self-inflicted gunshot wound.

He’s struggled on the season, batting just .128 with three home runs, eight RBIs and 53 strikeouts in 35 games. Amid his problems on the field, he started to discuss ways he could help the team off the field.

“Over the last year, I’ve promoted self-love and self-care, and the @sfgiants are offering me the opportunity to transition to a role as a mental-health advocate,” he wrote. “I couldn’t be more excited to remain in the game that saved me life. I remember the day after my suicide attempt, the first thought I had toward choosing to live came from thinking about playing baseball again.”

The River Cats are home this weekend against Round Rock.

Robinson was a fourth-round draft pick by the Texas Rangers out of Silverado High School in Las Vegas in 2010, and he toiled in the minors until 2017. 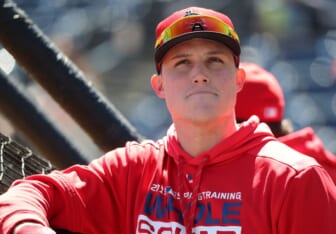 The Giants signed Robinson in January 2020 as a free agent after the Cardinals released him.

The mental health of athletes has been much discussed in the past month, with tennis star Naomi Osaka citing mental health for dropping out of the French Open and skipping Wimbledon. Liz Cambage of the Las Vegas Aces also said she won’t play for Australia in the Olympics for the same reason.

Robinson is grateful for the opportunity to speak with other athletes.

“For the Giants to believe I can help other players address their emotional well-being more comfortably and gain insight from my lessons learned is truly humbling,” he said.