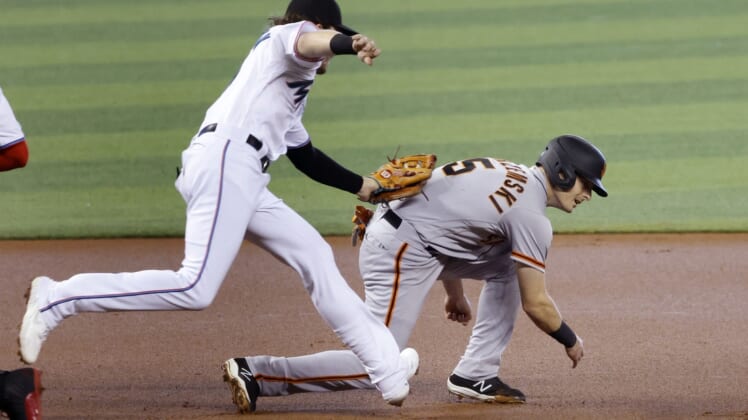 The Giants, who avoided what would’ve been a three-game sweep, also got an RBI single from Alex Dickerson and four perfect innings from their bullpen.

Tyler Rogers pitched the ninth, earning his fourth career save and his first this season.

Marlins center fielder Starling Marte left the game in the ninth inning with an unspecified injury. He departed in the middle of his at-bat.

San Francisco’s Camilo Doval made his major-league debut and pitched a 1-2-3 seventh, striking out two.

The Giants also got relief help from Jose Alvarez in the sixth and Caleb Baragar in the eighth. San Francisco’s pitchers combined to allow only three hits – all of them by Wood (1-0) – and no walks.

Miami’s Pablo Lopez (0-2) turned in a quality start – striking out a career-high nine batters in six innings — but still got the loss. He allowed six hits, two walks and one unearned run. All nine of his strikeouts came on changeups.

As a hitter, Lopez also had bad luck as he was robbed of extra bases by Austin Slater’s stellar catch in the left-center gap in the third inning.

San Francisco was without some key players, including catcher Buster Posey, who was hit by a pitch on Saturday. Posey has swelling in his left elbow.

In addition, pitchers Jake McGee and Logan Webb were placed on the injury list after feeling the effects after getting their second dose of a COVID-19 vaccine.

The Marlins ran into two crucial outs, killing a couple of rallies. With two on and none out in the first, Miguel Rojas got picked off. In the fifth, Jazz Chisholm was initially safe with a double, but he was called out a second later when his leg came off the bag. Second baseman Donovan Solano made the tag.

San Francisco scored on an unearned run in the third. Tommy La Stella lined a leadoff single just over Lopez’s head and into center field. With two outs, Brandon Belt reached on first baseman Jesus Aguilar’s fielding error, and the Giants cashed in on Dickerson’s RBI single on a 3-2 count.

The Giants failed to add on to their lead. After Belt’s leadoff double nearly cleared the right-field wall in the sixth, the Giants loaded the bases with two outs. However, pinch hitter Wilmer Flores flied out to end the threat.

Belt extended his streak of reaching base against the Marlins to 29 games.

The Marlins made 13 consecutive outs from the fifth inning through the end of the game.