San Francisco Giants hope to bounce back after collapse vs. Seattle Mariners 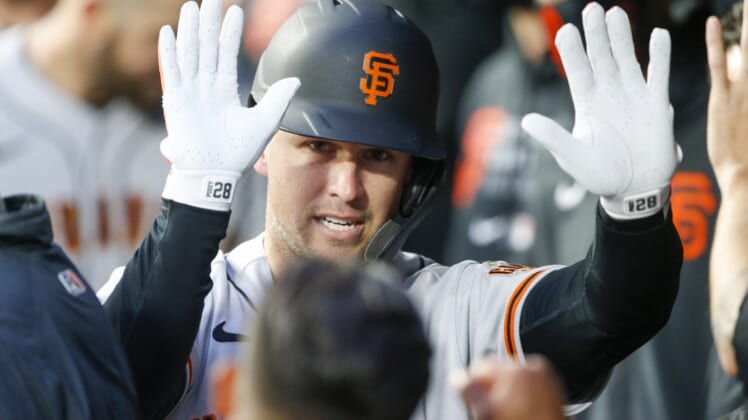 It didn’t take long for Buster Posey to make his presence felt in his return to the San Francisco Giants’ lineup.

The veteran catcher homered Thursday in the season opener at Seattle in his first plate appearance since the 2019 season. Despite taking a five-run lead into the bottom of the eighth inning, the Giants couldn’t close it out, and the Mariners rallied for an 8-7 victory in 10 innings.

Posey, a six-time All-Star and former National League MVP, opted out of the coronavirus-shortened 2020 season after he and wife Kristin adopted premature newborn girls. He chose to stay home to help care for the infants.

He made his 10th Opening Day start for the Giants on Thursday, as did first baseman Brandon Belt and shortstop Brandon Crawford, the last links to San Francisco’s three World Series titles last decade.

The trio tied Juan Marichal for the fifth-most Opening Day starts in the franchise’s San Francisco era. Only Willie Mays (15), Willie McCovey (15), Barry Bonds (14) and Robby Thompson (11) have made more.

“I feel very fortunate to be mentioned alongside all those names,” Posey said Wednesday. “I’ve been nicked up a little bit here the past few years, but the ability to make Opening Day starts and be on the field, I think our training staff deserves a lot of credit.

Posey nearly gave the Giants the lead in the top of the 10th when he came to the plate with two outs and the potential go-ahead run at third base. Posey hit the ball down the right field line, but the Mariners’ Mitch Haniger made a sliding catch to thwart Posey and end the inning.

Posey’s solo shot was one of four for the Giants in the opener. Evan Longoria, Austin Slater and pinch hitter Alex Dickerson also went deep.

Giants right-hander Johnny Cueto (2-3, 5.40 ERA last season; 2-1, 2.41 in three career starts vs. Seattle) is scheduled to start Friday against Mariners lefty Yusei Kikuchi (2-4, 5.17 last season), who will be facing San Francisco for the first time in his career.

James Paxton was originally supposed to start the second game, but the Mariners flipped his spot in the rotation with Kikuchi’s, putting Paxton fifth in the six-man starting staff.

“Looking at how the spring played out with Pax, I just want to give him plenty of time … before it gets going and cranking it up,” Mariners manager Scott Servais said. “But I thought he threw the ball really well the last couple times out (this spring).

“But you remember, he was a little slow to get going into the ‘A’ games and … I think it picks up the intensity quite a bit, so it just gives him a couple more days to make sure he’s good to go his first time out there.”

The Mariners’ first outing of the regular season finished successfully thanks to three consecutive walks in the 10th inning, with ball four to Jake Fraley sending home the winning run. Dylan Moore drove in three runs for Seattle, which rallied with one run in the seventh inning and six in the eighth.