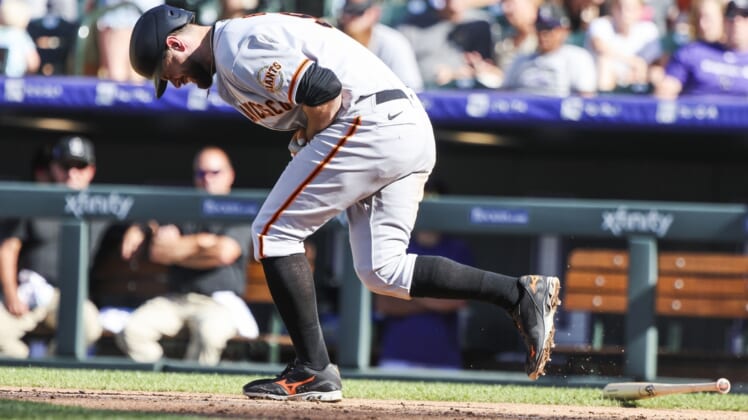 A week from the start of the postseason, the San Francisco Giants were dealt a significant injury blow Monday after an X-ray revealed a fracture in the left thumb of first baseman Brandon Belt.

Belt was hit in the hand while squaring to bunt a 93 mph Lucas Gilbreath fastball during the seventh inning of the Giants’ game against the Colorado Rockies on Sunday in Denver. He exited in the bottom of the inning, and San Francisco went on to earn its major-league-leading 102nd win.

Belt will meet with doctors over the coming days to determine a recovery plan and timetable for his return.

The Giants entered a day off Monday with a two-game lead over the Los Angeles Dodgers in the National League West. San Francisco will face the Arizona Diamondbacks and San Diego Padres over its last six games at home to conclude the regular season.

Belt, 33, is hitting .274 with a career-high and team-leading 29 home runs and 59 RBIs in 97 games this season. He returned in August after missing just over a month due to right knee inflammation, and he also had a stint on the injured list with a left oblique strain in May.

Belt has been especially hot of late, hitting .349 with nine homers and 18 RBIs in 22 games this month.

The Giants are expected to use Darin Ruf, Wilmer Flores and LaMonte Wade Jr. at first base in Belt’s absence. However, Ruf is currently on the injured list due to a right oblique strain. He is eligible to be activated Thursday.