In a corresponding move, the Giants optioned left-hander Sammy Long to Triple-A Sacramento.

Jackson, 33, was placed on the injured list on Saturday after receiving a COVID vaccination. He is 2-0 with a 3.77 ERA in 14 relief appearances this season.

Long, 26, earned a no-decision after allowing one run on two hits and one walk while striking out four in two innings of Saturday’s 4-1 home loss to the Colorado Rockies. He is 1-1 with a 5.72 ERA in eight games — four starts — this season.

In addition, the Giants recalled outfielder Luis Gonzalez from Sacramento and placed him on the 60-day IL with a shoulder injury. 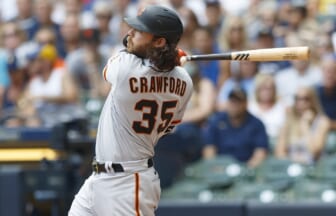 San Francisco claimed him off waivers from the Chicago White Sox on Aug. 11. Gonzalez, 25, hit .250 with two doubles in six games with the White Sox this season.