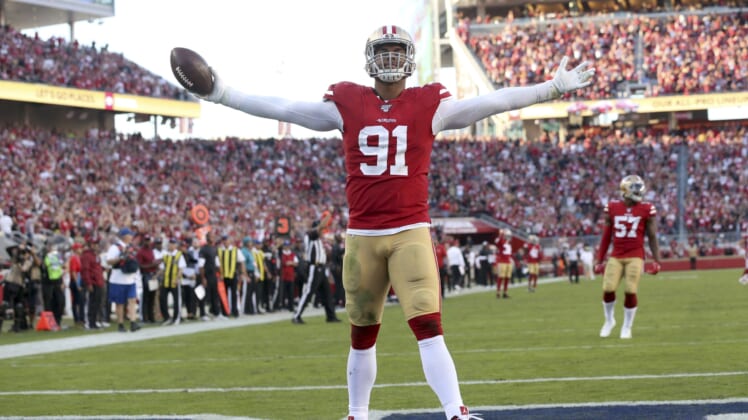 The San Francisco 49ers feature a pass defense that is on a level we haven’t seen in a long time, and it has the team set for a deep run in the NFL Playoffs.

The 49ers are pace to set a modern NFL record for least passing yards allowed per game. Allowing an average of 136.9 yards through the air per contest, this is the definition of a no-fly zone.

It’s a championship-caliber defense that has confounded even the likes of Russell Wilson and Aaron Rodgers.

It starts up front

As you can see from the breakdown above, the 49ers have been a nightmare for opposing offensive linemen every week. They are on an eight-game streak with three or more sacks per game and lead the NFL with 44 sacks total.

It’s not just one player doing the damage, either. The entire defensive front for the 49ers can bring the heat. Led by Arik Armstead, a former first-round pick who is having a career year, and rookie Nick Bosa, the team’s defensive line is utterly relentless at rushing the passer and making even the best NFL quarterbacks lose focus.

This is a front seven that has the speed, power and athleticism to absolutely impose its will on almost any offense. The coming game against the Baltimore Ravens — featuring the NFL’s most formidable offense — will be an epic showdown of strength-versus-strength in Week 13.

Star in the middle: Fred Warner

When the 49ers lost Kwon Alexander to a torn pectoral muscle, many wondered if the team’s linebacker group would struggle. After some early hiccups, the answer to that question is undeniably “no.”

The biggest reason for this is that second-year linebacker Fred Warner has continued to ascend and has to now be considered a top-3 player at his position league-wide.

A guy who is practically magnetized to the ball and is rarely out of position, this former third-round pick out of BYU has been the definition of “impact player” for this defense in 2019.

His stunning sack/strip of Aaron Rodgers on Sunday night set the tone for the team’s eventual blowout win over the Green Bay Packers. He’s also been touted as the quarterback of this formidable 49ers defense — a pretty amazing accomplishment considering the other talented players on the roster, including tenured veterans like Richard Sherman.

Richard Sherman and Co. are spectacular

It’s been a magical season for Richard Sherman and the 49ers’ secondary. The team’s ridiculous pass rush gets a ton of national, and local exposure, and it should. But these things tend to work in tandem, and that is absolutely the truth looking at San Francisco’s defense as a whole.

Sherman’s Achilles injury hasn’t been a factor and he’s back to playing like the All-Pro he has been his entire career.

One man doesn’t make a secondary, however. And it’s the play of the other guys in that defensive back room that has the 49ers soaring right now.

Ahkello Whitherspoon is healthy again, and his presence was very much a positive thing for the 49ers against the Packers on Sunday night.

The emergence of Emmanuel Moseley, who’s been a lock-down cornerback this year for the 49ers, and K’Waun Williams has given the team a huge boost in the secondary.

Then there’s the play of safeties Jimmie Ward and Jaquiski Tartt. These guys are playing outstanding, disciplined football both at and behind the line of scrimmage, and on the back end.

One of the best measures of a great pass defense is how many explosive plays it gives up. So far this season, the 49ers have allowed just 18 passing plays that went 20-plus yards (h/t Warren Sharp of Sharp Football Stats). These guys are playing together, they’re flying around every single play like it’s their last, and it’s an impressive sight to behold.

Robert Saleh finally has all the pieces

It was not long ago that some 49ers fans were railing on social media for their team to fire defensive coordinator Robert Saleh. Last year, the team ranked 13th in total defense (not bad) but allowed 27.2 points per game — fifth-worst in the NFL.

Then general manager John Lynch prioritized defense in free agency and the draft.

And oh, boy, what a difference blue-chip talent makes.

The 49ers have difference makers at all three levels defensively this season. Saleh finally has the players to make his scheme into a juggernaut pass defense. It’s all working right now.

The 49ers’ pass defense is going to be tested the next two weeks. San Francisco will be on the road to face the Baltimore Ravens in Week 13, then it will travel to the Bayou for a date with top NFC contender New Orleans.

This is a defense that travels well. Yet it’s not hard to imagine Lamar Jackson and Drew Brees having success. These matchups are going to be huge on the grand scale, and for the teams involved as well.

The bottom line: Should the 49ers prevail and their pass defense continue to confound the best the NFL has to offer, then it’s hard to imagine any other NFC team reaching Super Bowl LIV.