Quarterback Jimmy Garoppolo is off the injury report and on track to start for the San Francisco 49ers on Sunday night against the visiting Indianapolis Colts.

Prior to the 49ers’ bye week, Garoppolo missed the Week 5 loss to the Arizona Cardinals with a calf injury.

Rookie first-rounder Trey Lance made his first NFL start in the 17-10 setback to the Cardinals and sprained his left knee.

Lance has been ruled out for Sunday and Nate Sudfeld will be the backup when the 49ers (2-3) face the Colts (2-4).

Garoppolo, 29, has passed for 925 yards, five touchdowns and two interceptions in four games this season.

Lance, 21, also has played in four games and has passed for 354 yards, three touchdowns and one interception while rushing for 133 yards and one score. 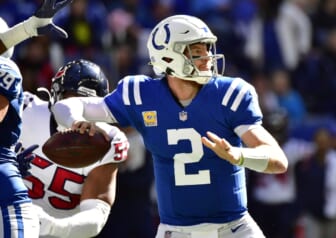