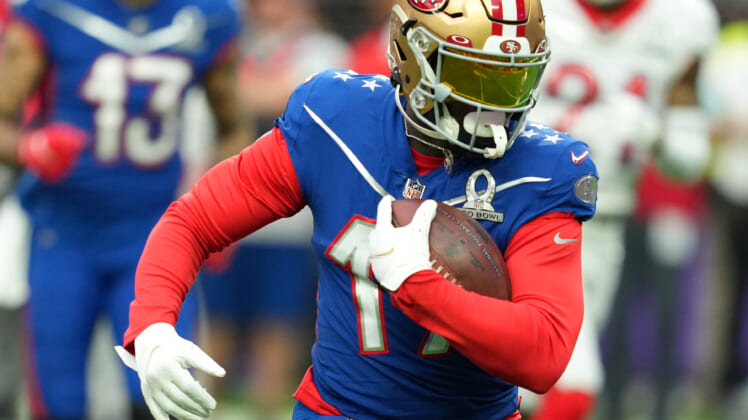 San Francisco 49ers general manager John Lynch made it clear on Wednesday that the team has no plans to make a Deebo Samuel trade, and the talented wide receiver will be wearing red and gold in 2022.

Samuels’ future in San Francisco has been one of the biggest stories during the 49ers’ offseason despite the 26-year-old being signed to a contract for the upcoming season. However, he will make just under $4 million this year after putting an absurd All-Pro season in 2021. Where he racked up over 1,700 all-purpose yards and 14 touchdowns.

Suffice to say, the three-year veteran, and one-time Pro Bowler is unhappy with his current compensation and has made it publicly known. First with subtle statements on social media, and then in a not-so-subtle way when he reportedly asked for a trade back in April.

In what has been a very busy NFL Offseason, two superstar receivers — Tyreek Hill and Davante Adams — and a rising star in AJ Brown were traded and signed massive contract extensions, after their previous teams were unwilling to invest serious cap space in a wide receiver.

Yet, despite the writing seemingly on the wall for the end of Deebo Samuel’s tenure in San Francisco, the organization’s front office has seemed confident things will be rectified between the player and team. On Wednesday, 49ers GM John Lynch once again made a bold proclamation about his top wideout’s future on the team. And franchises hoping to swing a trade before this season should not get their hopes up.

The San Francisco 49ers are in a major transition with plans to make second-year talent Trey Lance their starting quarterback this season. The organization is fully aware Lance will have a greater chance of success in his first full season leading the offense with Samuel as his primary target.

Last season’s starter, Jimmy Garopollo, is expected to be in trade discussions once he is fully recovered from offseason shoulder surgery.