San Francisco 49ers edge rusher Nick Bosa is one of the best defensive players in the NFL. Coming off a torn ACL, Bosa is looking to return to his elite form to boost the 49ers’ Super Bowl chances and to strengthen his case for a new contract.

Drafted with the No. 2 pick in the 2019 NFL Draft, Bosa won’t be eligible for an extension until next offseason. Under league rules, a player can sign a long-term deal with their team after completing the third year of their rookie contract.

While Bosa and the 49ers are focused on the present, there is already talk about his long-term future with the franchise. At a time when pass rushers keep signing record contracts, Bosa could be the next in line for a market-setting deal.

Sports Illustrated’s Albert Breer discussed why Bosa could be the next edge rusher to land a lucrative contract extension. What would make this unusual for the 49ers, as the NFL insider notes, is it would go against the franchise’s recent precedent with rookie contracts.

“While the Niners’ current brass didn’t extend players like DeForest Buckner or Arik Armstead with two years left on their rookie deals, Bosa could be one who, if he has a monster year, they break precedent for when he becomes eligible for a deal. The reason to, in my mind, would be to get ahead of what could be a gambling/TV revenue-fueled explosion in the cap in 2023.”

We’ve seen an organization go again one of its negotiation policies recently. The Pittsburgh Steelers have been against offering guaranteed money in future years of a player’s contract. It was the last hurdle during negotiations with T.J. Watt, but the Steelers eventually caved.

Why the San Francisco 49ers should extend Nick Bosa in 2022

Edge rusher is arguably the second-most important position in the NFL. Rostering a player who can single-handedly disrupt an offense and make life miserable for the quarterback is essential to having a great defense. San Francisco knows how valuable Bosa is to this defensive front and he isn’t a player who a franchise can risk leaving in free agency. 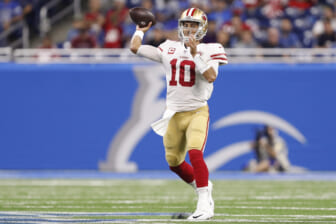 There’s an additional incentive for the 49ers to start negotiating a contract with Bosa as soon as possible. The NFL’s new TV contracts are worth $100-plus billion over the next decade and the league expects to make $270 million this year from betting deals. With league revenue expected to skyrocket, the NFL salary cap will rise and salaries will follow suit.

Watt, Los Angeles Chargers edge rusher Joey Bosa ($27 million) and Cleveland Browns defensive end Myles Garrett ($25 million per season) are the highest-paid edge rushers in the NFL. If Nick Bosa is healthy and repeats the dominance we saw during his 2019 rookie season, he’ll be the next pass rusher to make $25-plus million per season.

If the 49ers wait, refusing to seriously negotiate a long-term deal until Bosa is entering the final year of his contract, they risk having to pay him a lot more in the future.