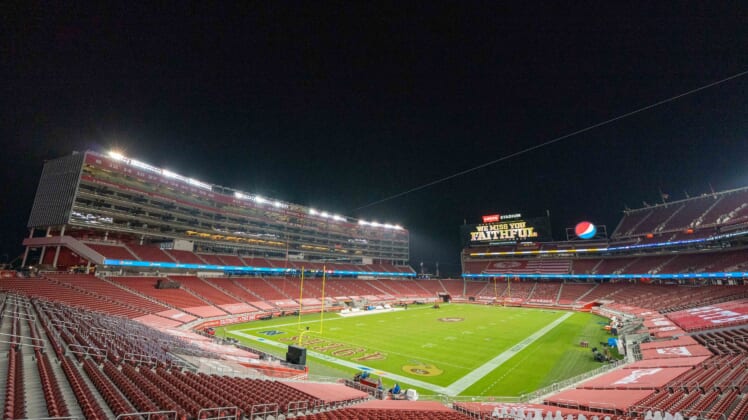 October 4, 2020; Santa Clara, California, USA; General view of Levi’s Stadium with the video board message “We miss you faithful” after the game between the San Francisco 49ers and the Philadelphia Eagles. Mandatory Credit: Kyle Terada-USA TODAY Sports

Update: Santa Clara officials will not allow fans in attendance.

The San Francisco 49ers are in one of those regions around the United States that has been slow to open up amid the COVID-19 pandemic. Despite cases rising in the country, it looks like that’s going to change here soon. The 49ers got word from California authorities about hosting games for the remainder of the 2020 NFL season.

It’s pretty good news for the 3-3 49ers as they look to overcome some struggles at Levi’s Stadium throughout the first half of the 2020 NFL campaign.

San Francisco 49ers news: Team can have 20% capacity for the remainder of the NFL season

As noted in his report, Kevin Yamamura of Politico does indicate that officials in Santa Clara will have some say. Remember, that this Northern California county was the first in the United States to shut down professional sports earlier this year due to the pandemic.

This is rather interesting news in that California Governor Gavin Newsom had noted multiple times in the past that he didn’t think the state would be able to have teams host fans for games throughout the 2020 calendar year.

As for the 49ers, this would qualify as some pretty big news. San Francisco has lost three of its first four games at Levi’s Stadium. The 49ers’ first win of the season at home came Sunday night against the division-rival Los Angeles Rams.

This also isn’t a statewide mandate. What does that mean? Well, the Chargers and Rams in Southern California won’t be able to host fans. State officials have set up a tiered system as it relates to NFL teams being able to host fans. Los Angeles is currently purple, the highest tier.

COVID-19 cases in California have been down some in recent weeks. However, there’s been a recent spike. Even then, the state ranks in the bottom 10 in test positivity rate. That’s good news.

For the 49ers, this is some good news as Kyle Shanahan and Co. continue with what is a brutal schedule moving forward on the NFL season.

The 49ers’ next six games include five outings against teams who made the playoffs a season ago. The only exception being a 4-2 Rams team.