The San Francisco 49ers shocked the NFL world by trading three first-round picks for the No. 3 selection in the 2021 NFL Draft to land their future quarterback. While Kyle Shanahan ultimately drafted Trey Lance, there might be been a different target originally.

Following San Francisco’s blockbuster trade, reports surfaced that the franchise wanted to select Mac Jones. The Heisman Trophy runner-up was viewed as an ideal fit for the Shanahan offense, thanks to his accuracy and tremendous football IQ.

The 49ers went on to draft Lance, with the organization heaping praise on the dual-threat passer out of North Dakota State. But a new report before Week 1 paints a picture of how the 49ers’ process may have unfolded.

According to ESPN’s Adam Schefter, one of the reasons why San Francisco traded up to the third pick is because they believed the New England Patriots would beat them in a bidding war to draft Jones. The 49ers viewed New England as their biggest competition for the Alabama star and wanted to ensure they weren’t leapfrogged for their quarterback choice.

Part of the team’s thought process centered on Bill Belichick’s ties to Nick Saban and the Crimson Tide. San Francisco also believed the Patriots identified Jones as their quarterback of the future months before the NFL Draft. 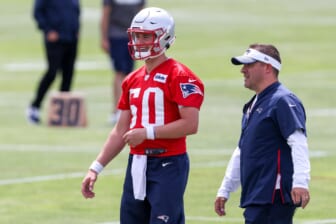 This isn’t the first time Schefter has continued to tie Jones to the 49ers. He reported that the organization hadn’t decided who it would take until the final days before making its pick.

It’s certainly possible the 49ers viewed the quarterbacks very closely, but Shanahan’s comments during the 2020 season and after the draft process hinted that Lance always fit the style of quarterback he was looking for.

San Francisco’s suspicion that New England always wanted Jones certainly seems accurate since it drafted them. But it’s difficult to gauge whether or not they were serious about moving up for him, given the Patriots watched four quarterbacks taken ahead of him and waited until he became available at No. 15.

Whether this is a further effort to pump up Jones’ stock before he makes his first NFL start or not, both teams are happy with the quarterbacks they landed. Only time will tell which organization made the right decision and it might be both of them.