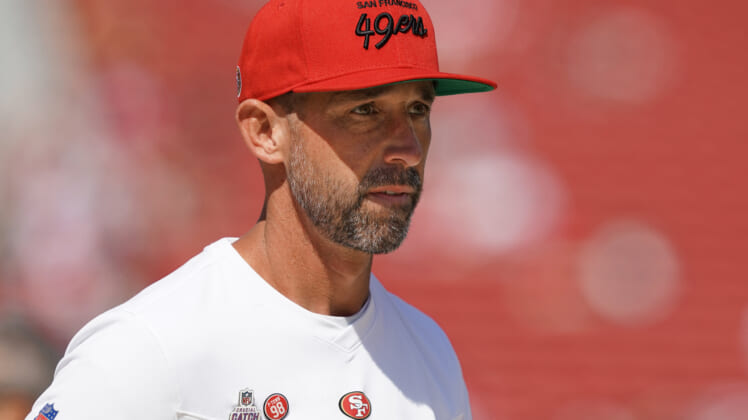 San Francisco 49ers head coach Kyle Shanahan is all for his players doing whatever is necessary to up their intensity on the field, even to the point of nearly blacking out. However, he is demanding that his players learn to better walk that fine line between high intensity and an all-out brawl.

Training camp is a pivotal point during the NFL season. As athletes compete against their teammates during hot summer days, there are many players competing for jobs, trying to earn respect, and taking on leadership roles. In a sport as physical and intense as football, fights breaking out at a training camp practice is not uncommon.

49ers head call coach Kyle Shanahan is all for his players being intense. He actually demands it from his team. “I love the intensity of it. I don’t think you have to fight to be intense, though. Scuffles are scuffles but then they lead to other stuff,” Shanahan said after practice on Friday. Unfortunately for him, the other stuff is what went down earlier today.

At one point during Friday’s drills, a scrap broke out between a pair of opposing players. Fights at 49ers camp have become a habitual problem and at that moment Shanahan paused the entire practice to pull his team into a huddle and let them know, very loudly, that he won’t have any more of that this summer.

The coach was asked about the incident after practice and explained that while he admires physical and firey players, he needs his athletes to be able to control themselves in the most heated of moments to avoid costly penalties and injuries.

The five-year veteran coach has a big season ahead. The coaching staff will be grooming Trey Lance into a true franchise quarterback and will look to avoid a fourth losing year in six seasons.