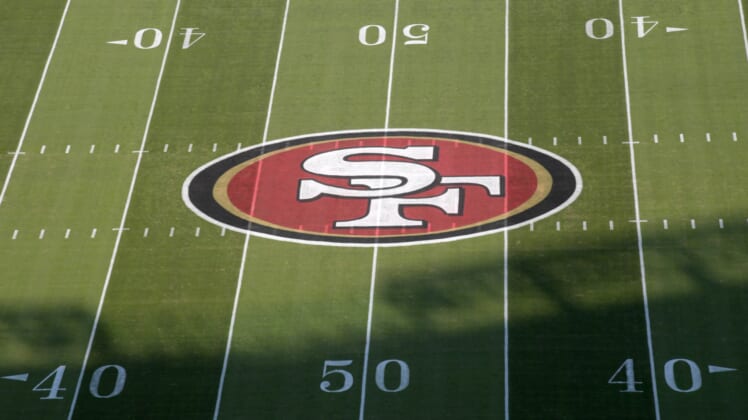 The San Francisco 49ers put themselves in a tremendous position heading into the 2020 NFL Draft, trading Pro Bowl defensive tackle DeForest Buckner to the Colts for a first-round pick.

While the loss of Buckner hurts, this gives the defending NFC champs a top-13 pick to address a position of utmost need. Wide receiver.

We’re serving up a full seven-round 2020 NFL mock draft for the 49ers that includes a trade back out of the 31st pick.

49ers head coach Kyle Shanahan has to be salivating over the idea of adding one of the top-three receivers in the draft after they lost Emmanuel Sanders in free agency. While Jerry Jeudy might be a better fit, he was off the board prior to San Francisco’s selection in this specific mock simulation.

Instead, the 49ers add an explosive play maker in Lamb who would team up with promising youngster Deebo Samuel to form an elite paring in Northern California. The 6-foot-2 Lamb has tremendous burst off the line and can create separation after his initial break. That’s evidenced by the 21.4 yards he averaged per catch last season.

Note: 49ers trade 31st pick to the Panthers for second and third-round selection

Despite adding an additional first-round pick in the Buckner trade, these 49ers are still without selections in Rounds 2-4. That’s the price they paid for picking up veterans who ultimately helped the team to the Super Bowl. Common logic suggests San Francisco will move down from the 31st pick.

If so, Ruiz has to be a primary target. San Francisco has not done much to upgrade a questionable interior of its offensive line. Even if youngster Daniel Brunskill proves to be a plus-level starter, the team needs help. The 307-pound Ruiz would be a perfect fit in Shanahan’s zone-blocking offense. He has the athleticism and history of success offenses running this scheme bank on. Ruiz could also be a Day 1 starter, if needed.

An unfortunate ankle injury that cost Hall all but six games of his senior season with the Cavs pushed him out of the first round. That came after this 6-foot-1 corner decided to return to Virginia rather than enter the 2019 NFL Draft.

From a pure on-field standpoint, Hall is a potential long-term starter for a 49ers squad that is relying on an aging Richard Sherman and former undrafted free agent in that of Emmanuel Moseley. He’s proven to have shutdown ability. Hall’s strengths in press coverage is also something the 49ers covet under defensive coordinator Robert Saleh. I could not envision a better fit.

This is the spot of the draft where 49ers general manager John Lynch has crushed it. Just think about all-world tight end George Kittle, who was a fifth-round pick of the 49ers back in 2017. Lynch will have to duplicate this success if San Francisco wants to create depth.

It’s in this that the front office head adds a highly productive small-school product in Round 5. Highsmith recorded 21.5 tackles for loss and 15 sacks last season. He could fit in behind Pro Bowlers Nick Bosa and Dee Ford as a rotational pass rusher.

Fresh off a resounding performance at the NFL Scouting Combine, I am not too sure that the 308-pound Davis will be available in Round 5. Alas, that’s how the mock draft simulator played out here. If so, the 49ers would pounce on this opportunity every time. They need help at defensive tackle following the Buckner trade. Davis, who recorded 11 tackles for loss and eight sacks last season, would be a perfect fit.

Despite playing tackle during his college career in Eugene, this former Duck seems to be a better fit inside at the NFL level. Throckmorton (6-foot-5, 317) has the size and physicality to stand up against big interior pass rushers. He lacks the athleticism to play outside. San Francisco would be getting a potential future starter and immediate depth at guard by selecting him in Round 6.

Some have San Francisco going running back early in the 2020 NFL Draft. While the idea of adding J.K. Dobbins or Jonathan Taylor to the mix is appealing, Kyle Shanahan led the NFL’s second-best rushing attack last season with three undrafted free agents playing key roles. A small-school back, Robinson has the athleticism and game-breaking speed to carve out a role in this zone-blocking offense.

49ers can super charge offense thanks to DeForest Buckner trade

How free agency and trades have impacted 2020 NFL Draft