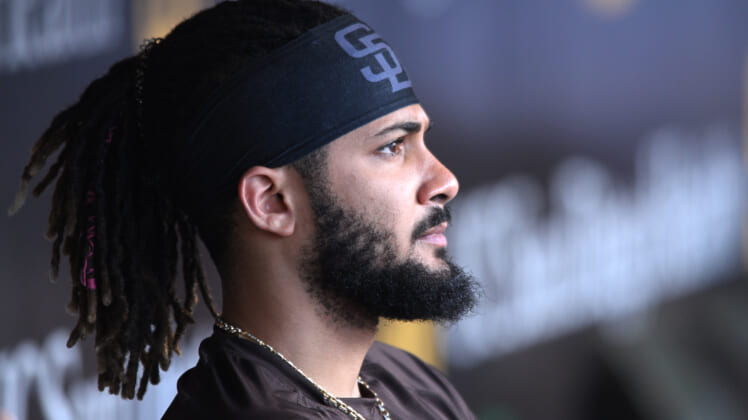 The San Diego Padres are clearly all-in on the 2022 MLB season, maybe more so than any other team in baseball this season. They’ve made massive blockbuster moves to place them in a position to compete for a chance at reaching the World Series and, maybe with some luck, actually win the championship. Apparently, Fernando Tatis Jr. didn’t get the memo.

Tatis was recently handed an 80-game suspension for failing a drug test that revealed he took a banned substance, and now his team is “absolutely livid” with the star ballplayer over the situation.

Shortly after Tatis’ suspension was announced, the Padres revealed they had canceled his scheduled Sept. 7 bobblehead day. Not only that, they’ve removed Tatis from their mural at Petco Park, which recognizes the most well-known players on the team.

But it’s not just the front office or the public relations team that is working overtime to distance themselves from Tatis after his PED suspension. The players in the clubhouse are also upset with their teammate for putting himself in a position to get suspended in the first place.

Understanding the situation he’s put his team in, hurting their chances to advance in October, Tatis intended to meet with his Padres teammates in a group session this week to tell his side of the story. Shortly after that announcement was made, several teammates and team officials relayed their frustration and anger with Tatis over the actions that have transpired.

Tatis, who had been out with a wrist injury was nearing a return and had even began a rehab assignment with San Diego’s Double-A San Antonio affiliate. But then the PED suspension announcement came, noting Tatis had been found with Clostebol, a banned substance, in his system, which he claims he took to treat ringworm.

But clearly, like many others, that explanation wasn’t valid enough for his teammates. Everyone knows the rules, and they all have the same resources available, meaning Tatis could have easily checked in to ensure the medication he was taking was allowed.

Instead, Tatis is suspended for 80 games, and his teammates are pissed at him for being so ignorant.

How the Fernando Tatis Jr. suspension impacts his future in San Diego

The San Diego Padres may have just signed Tatis to a 14-year, $340 million contract extension last season, but as you can see from Clevinger’s comments, among others, it’s clear he has some ground to make up before he’s welcomed back with open arms.

Depending on how far they go in the postseason, the answer to that question may fluctuate as we go. For now it’s hard to even imagine the team moving on from Tatis, but they do at least have another mega superstar now with Juan Soto. Maybe there’s a future where the AJ Preller tries to see what kind of crazy trade package they could get for Tatis? Would he be a big enough trade chip to entice the Los Angeles Angels to loosen their grip on Shohei Ohtani? That remains incredibly unlikely, but crazier things have happened.