In an insane new twist to the possibility of the San Diego Padres acquiring Washington Nationals superstar Juan Soto, it seems that slugger Josh Bell could also be added to the blockbuster deal.

After turning down a massive 15-year, $440 million contract offer from the Nationals, Soto became the biggest fish on the 2022 MLB trade market. The talented outfielder has since been linked to a half dozen teams as possible destinations, including the Yankees, Cardinals, Dodgers, and Mets. However, in recent days it seems as if the Padres have jumped to the front of the pack as the likely front runner in the Soto sweepstakes.

On Tuesday, San Diego’s pursuit of the two-time All-Star took a new and fascinating turn. Along with Soto, the Nats have also been looking to move first baseman Josh Bell. The seven-year veteran is having a career year and the organization is looking to move him while his value is high before he becomes a free agent this winter. Well, it seems Bell may now factor into a Juan Soto trade between the Padres and Nationals.

Juan Soto is the type of talent that would be a major impact player on any team he went to. Even a squad like the league-leading Yankees. However, adding another talented bat — even just for a few months — like Bell would be a paradigm shift moment in the National League pennant pecking order.

The Padres are currently in second place in the NL West and are two games up on the Philadelphia Phillies for the final wild-card spot. So clearly, a playoff birth is far from guaranteed for San Diego. However, they have been able to do this without having Fernando Tatis, Jr. for the majority of the season. If they can head into the playoffs with Soto, Bell, a healthy Tatis, Jr., and Manny Machado in their lineup, it becomes one of the most formidable in the league. 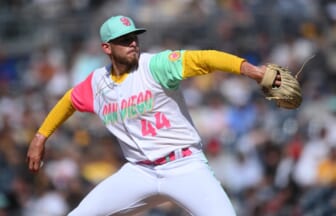 In the end, pitching still wins championships and the Padres have a strong one-two punch in Joe Musgrove and Yu Darvish. So would adding Bell and Soto make San Diego title contenders in 2022? The simple answer is yes, but they may still not be the overall favorites.