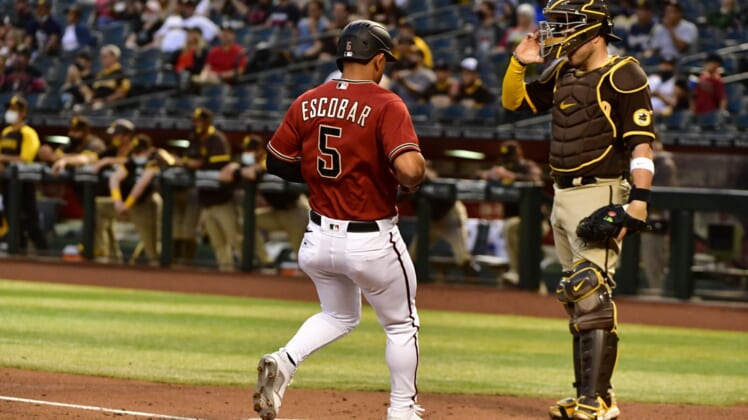 The slumping San Diego Padres tied a franchise record with seven straight hits to open an inning — capped by Manny Machado’s bases-loaded triple in the fifth — en route to a 12-3 rout of the Arizona Diamondbacks in Phoenix.

Before the six-run burst, the Padres had scored just one run on seven hits over the first 13 innings in Arizona. They finished with 15 hits Wednesday.

But the win came at a price. Rookie left-hander Ryan Weathers departed the game after one inning with what was described as arm soreness. Padres manager Jayce Tingler and a team trainer had made a mound visit after the first Arizona hitter when the first fastballs from the 21-year-old were clocked under 90 mph.

Jake Cronenworth added a solo homer against Matt Peacock in the sixth, and the Padres added three runs in the eighth against Yoan Lopez on an RBI double by Kim, a pinch-hit RBI single by Wil Myers and a sacrifice fly by Tatis that Rojas leaped to catch above the fence in right, preventing a three-run homer.

Jorge Mateo closed out the scoring with a two-run homer in the ninth off Kevin Ginkel. Third baseman Asdrubal Cabrera got the final two outs as the Diamondbacks’ seventh pitcher.

The Diamondbacks had taken a 1-0 lead in the second on Nick Ahmed’s RBI double off Nick Ramirez. They made it 2-0 on Wyatt Mathisen’s first homer of the season in the fourth off Aaron Northcraft. Ahmed singled home Arizona’s final run in the sixth.

Northcraft, the third of eight Padres pitchers, was credited with his first major league win.