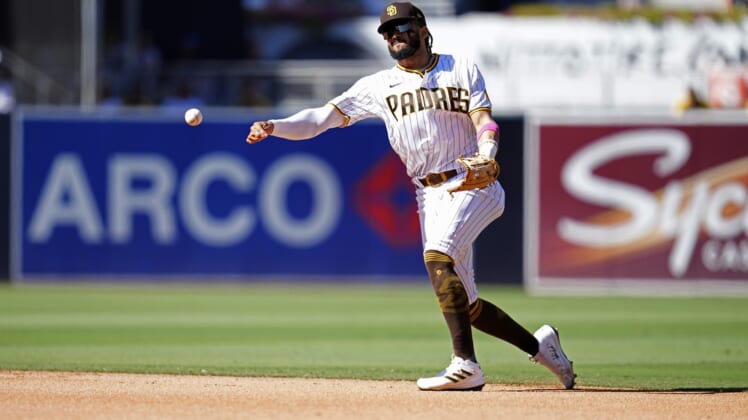 The San Diego Padres kept their flickering playoff hopes alive Thursday afternoon, avoiding a series sweep at the hands of the visiting San Francisco Giants when Jurickson Profar scored a walk-off run in the last of the 10th for a 7-6 victory.

After Ross Detwiler (3-1) pitched out of a two-on, no-out jam in the top of the 10th, the Padres advanced automatic runner Profar to third on a sacrifice bunt by Ha-Seong Kim. Dominic Leone (3-5) then got Victor Caratini to hit a ground ball, but second baseman Tommy La Stella had to dive to his right to field it and had no chance to get Profar at the plate.

In snapping their season-worst-tying, five-game losing streak, the Padres (77-75) kept pace with the St. Louis Cardinals in the National League wild-card race after the Cardinals completed a sweep of the Milwaukee Brewers earlier in the day.

The Padres will take a six-game deficit into the final 10 games of the season when they open their final home series of the season — a four-gamer against the Atlanta Braves that includes the completion of a suspended game — on Friday night.

The Giants (99-54) not only were denied a 100th win on the season, but also lost a game on their NL West lead over the second-place Los Angeles Dodgers, who now trail by just one game.

San Francisco will take a one-game lead to Colorado, where the Giants and Rockies will open a three-game series on Friday night.

After spotting the Padres four runs in the first inning, the Giants used a two-run home run by Mike Yastrzemski, his 24th, in the second and a three-run blast from pinch-hitter Austin Slater, his 11th, to take a brief 5-4 lead in the sixth.

The Padres countered with two homers of their own — solo shots by Trent Grisham, his 15th, and Kim, his seventh — to reclaim a lead in the bottom of the sixth, only to lose it again when La Stella’s two-out, RBI double in the seventh created the 6-6 tie that lasted until the 10th.

Giants starter Logan Webb made it through just four innings, having allowed four runs, all in the first inning, and four hits. He walked two and struck out three.

Three of the four hits off Webb came in the first, after he had issued two walks to set the stage for the scoring. Kim and Victor Caratini had run-scoring singles in the uprising.

Caratini finished with three hits and two RBIs, while Kim and Grisham drove in two runs apiece for the Padres, whose walk-off win was their sixth of the season.

The Giants got just six hits off six Padres pitchers, but five went for extra bases.